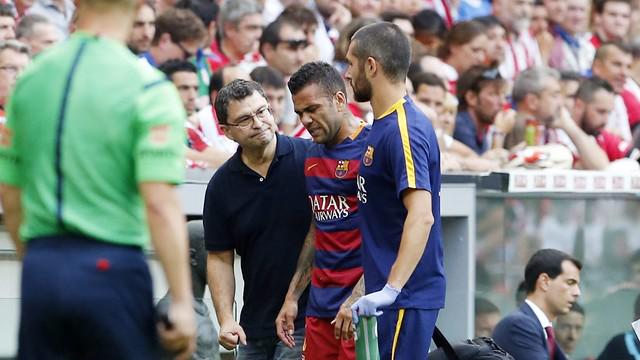 Barcelona got their Liga season off a winning start but their happiness will be short-lived after starters Sergio Busquets and Dani Alves were forced out through injuries.

The right-back was substituted off on 20 minutes after he seemed to be having a problem with his groin and was replaced by youngster Sergi Roberto.

Sergio Busquets clashed with a Bilbao player in the second half and got an ankle problem. He went down in pain and needed to be stretched off and was replaced by Marc Bartra.
Luis Enrique grew frustrated when Sergio Busquets went to ground but said in his post-match interview that he doesn’t think the injuries will be too serious.

Reports suggest Dani Alves will miss the next one month of action while Sergio Busquets wil be out for at least 15 days, official tests will be carried out by the Barça medical staffs today.

Dani Alves and Sergio Busquet will join Douglas, Neymar and Adriano in the sideline and with Pique suspended, Luis Enrique will have to make do with most of his second string players in Barça’s next Liga game against Malaga next week.