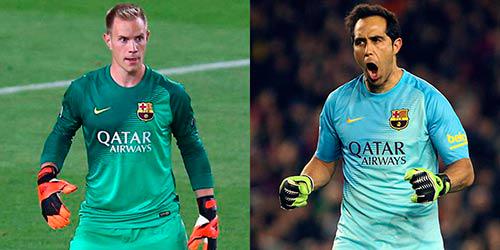 Barcelona fans prefer goalkeeper Claudio Bravo as the club’s Liga goalkeeper over Marc Andre Ter Stegen, according to a poll carried out on FlyBarca.

The poll was carried out by a total of 858 Barcelona fans with the poll question asking “Who Should Be Barcelona’s Liga Goalkeeper This Season?” with four options, Ter Stegen, Bravo, Masip and.’Any of them’.

In the poll, Claudio Bravo was a clear winner grabbing an astonishing 86.48% of votes after 742 of the 858 voters preferred him as first choice in La Liga.

Marc Andre Ter Stegen was second on the ball but was far off from Bravo with 11.66% (100) of the voters picking him as their favourite choice.

As expected, the other two options will get low votes and it was so as Jordi Masip got just 9 votes (1.05%) while only 7 voters (0.81%) feel it doesn’t matter so any of the goalkeepers should start.

Last season, Claudio Bravo was Barça’s first choice goalkeeper in La Liga and he did absolutely well, winning the Zamora Trophy after conceding just 19 goals in 37 games as Barça won the trophy for the 23rd time.

Ter Stegen was in goal for Barça in their 5-4 European Super Cup win over Sevilla but has shipped in 8 goals in two games so far after Barça lost 4-0 against Bilbao, a game which the German was in goal.

Bravo was in goal for the second leg against Bilbao which ended 1-1 but Barcelona fans feel nothing should be changed from last season and the Chilean should continue in La Liga.