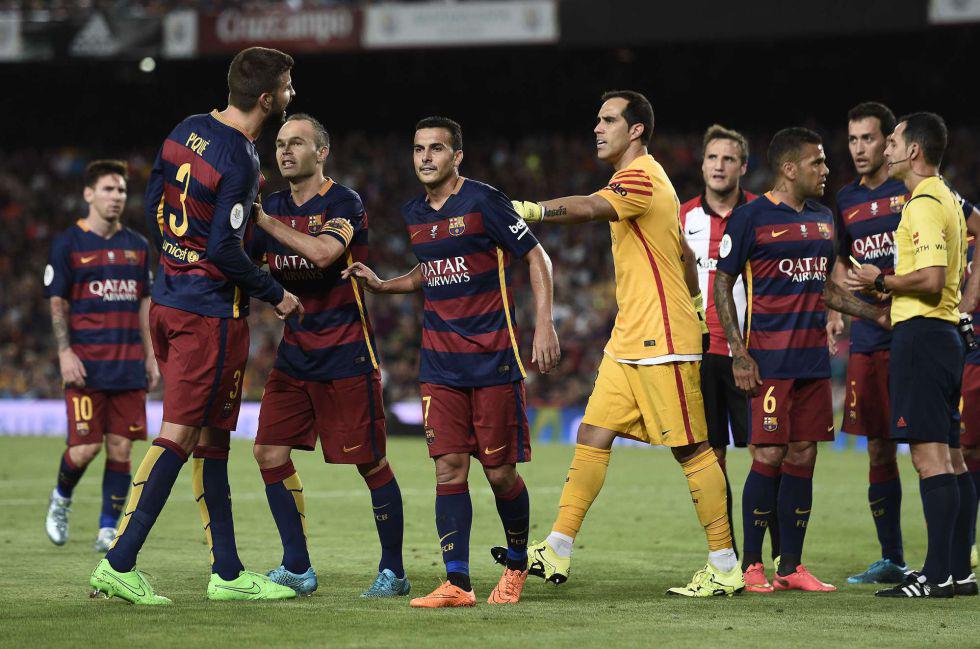 Barcelona kick-start their defence of La Liga title when they travel to San Mames to take on Athletic Bilbao on Sunday but the Catalans are fazed with a crisis in defence as four defenders, including all the left-back options, are likely to miss the game.

Following his sending off in Barça’s Spanish Super Cup 1-1 draw against Athletic, Gerard Pique will automatically miss his side’s first Liga game of the season through suspension though the actual length of the ban is still undecided.

Pique was shown a red card for confronting the linesman and is facing a possible long term ban for the insultive remarks made on the official with the actual length set to be announced on Wednesday.

Prior to Pique’s suspension, Jeremy Mathieu had already been ruled out of the game after he picked up his fifth yellow card of last season in Barça’s final league game which means his suspension rolls over into the the first game of this season.

Aside from Pique and Mathieu, left-backs Jordi Alba and Adriano Correia are doubtful for the fixture but the former may return in time. Adriano picked up a groin injury before Barça’s Spanish Super Cup game but the length of the injury is still unclear.

If Alba and Adriano fail to recover before the fixture on Sunday, it will mean Luis Enrique will have to use an artificial left-back as his three options will all be out.

Thomas Vermaelen may take the role due to being a left-footer and Enrique might just decide to call upon Barça B left-back Alejandro Grimaldo who has been highly tipped for promotion.