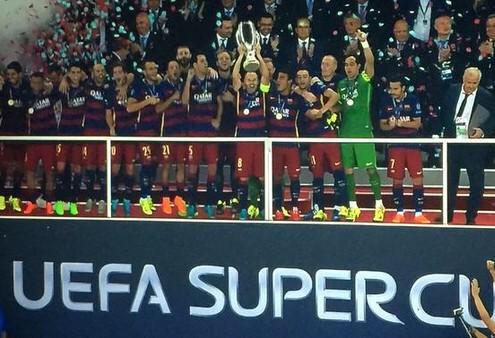 FC Barcelona are the 2015 Uefa Super Cup Champions after they beat Sevilla 5-4 in an enthralling 120 minutes of football with want-away winger Pedro Rodriguez being the hero.

The Spaniard is set to leave Barça after the sporting director Robert Fernandez confirmed earlier on Tuesday that Pedro, who has been heavily linked with a move to Manchester United, has told the club that he wants to leave.

In what could be Pedro’s final appearance in Barça colours, the star came on as an extra-time substitute to net the all important goal on 115 minutes after Barça had carelessly surrendered a 4-1 lead.

Lionel Messi scored two brilliant freekicks in the space of 9 minutes to give Barça a 2-1 lead after Ever Banega had given the Andalusians the lead on 3 minutes with a goal of the same manner.

Luis Suarez added a fourth on the 52nd minute, but the Catalans were left to bite their nails as Jose Antonio Reyes’ strike and Kevin Gameiro’s penalty brought Sevilla back into the game, before substitute Ciro Immobile set up his fellow substitute and close-season signing Yevhen Konoplyanka for a stunning equaliser.

However, Barcelona would go on to win the game as Pedro Rodriguez fired from close range with 5 minutes left in extra time.

There were no surprises in Barça’s line-up except for the starting of Rafinha Alcantara over Pedro.

It was Sevilla that started as the brighter side when Ever Banega curled a superb 25-yard free-kick into the top left-hand corner in the third minute, with Ter Stegen barely moving a muscle.

It didn’t take long before that man, Messi showed himself. The Argentine levelled with a free-kick of his own on the 7th minute after he fired a soft lob to the top right-hand corner, leaving Beto with no chance.

The free-kick galore didn’t end with that as Messi fired home another curler on the 16th minute, this time, from 30 yards out.

Barcelona dominated play and Luis Suarez had a goal ruled out for offside, but the Uruguayan was on hand to set up Rafinha for Barça’s third goal. 3-1 at half time.

Barça increased their lead seven minutes into the second half after Sergio Busquets capitalised on Benoit Tremoulinas’ sloppy pass to set up a free Suarez, who made no mistake with an easy first-time shot.

The game looked over but Sevilla were ready to give a fight and they started an unlikely comeback in the 57th minute when Antonio Reyes fired home Vitolo’s cross from the left, with Barça’s defence practically disorganised.

Messi had another free-kick scrape the woodwork and Rafinha saw a header rebound off the crossbar.

The next action took place at the other end as Jeremy Mathieu tugged Vitolo to ground prompting referee Willie Collum to point to the spot and booking the french defender.

Gameiro confidently fired a powerful spot-kick low into the left-hand corner with the ball already in the back of the net before Ter Stegen could do anything to save it.

Unbelievably, Sevilla were level in the 81st minute when substitute Ciro Immobile’s capitalised on a poor control by Marc Bartra on the left hand side to square the ball to Yehven Konoplyanka who tapped in to an empty net. 4-4!

That game went into extra time with both sides giving their all. It was destined to go into penalties until a 115th-minute drama occurred.

Messi got a free-kick from close range after marauding through Sevilla’s defence. The Argentine saw his free-kick blocked by the wall, a handball precisely, but he fired a low shot again which was parried by Beto only for Pedro to fire the rebound from close range to give Barça their fourth title of 2015 as they aim to secure a six-trophy haul.

Sevilla came very close to equalising on 121 minute after Immobile crossed for Adil Rami but the defender wasn’t fast enough as the ball hit his knee and went agonisingly wide of the left post.