Neymar, Messi and Rakitic were all on the scoresheet as the Catalans easily strolled past Roma to seal their 38th Gamper Trophy 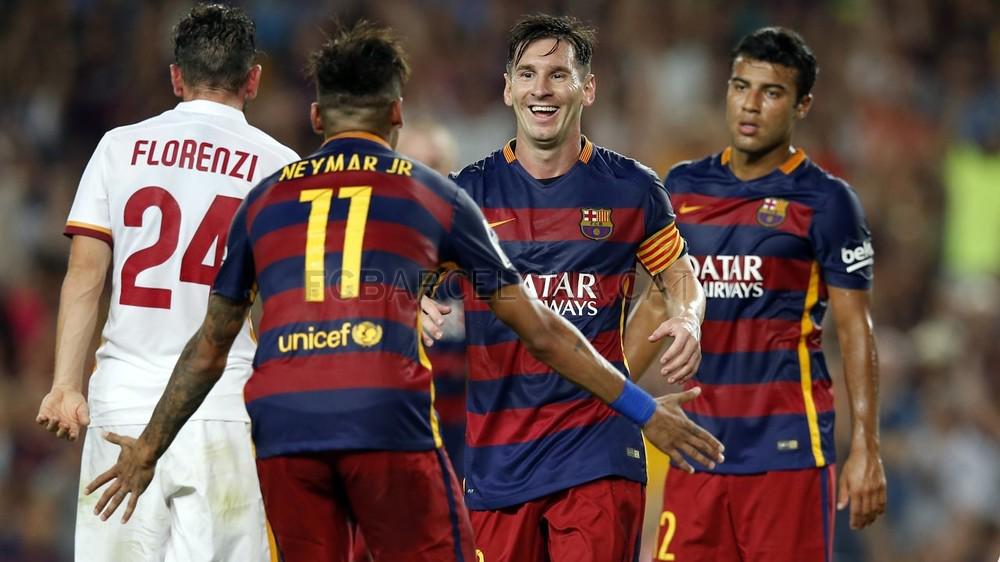 FC Barcelona beat AS Roma 3-0 after turning in a wonderful performance to seal the 50th edition of the Trofeo Joan Gamper.

The Catalan giants were in total control throughout the game, exploiting the Roma defence at will with the Italians lucky enough to ship in just 3 goals.

Neymar broke the deadlock before the 30-minute mark, rounding Roma’s new goalie Wojciech Szczesny to leave himself with a simple tap-in.

Lionel Messi could, or rather should have been red-carded after grabbing the throat of Mapou Yanga-Mbiwa and going head-to-head with the player, but he doubled Barca’s lead moments later.

Ivan Rakitic made it 3-0 shortly after the hour-mark with a screamer to give Barca their 38th Joan Gamper crown.

The Blaugranas started brightly with Captain Messi firing an effort straight to Szczesny before Neymar missed a glorious chance to score the opener, shouldering a Dani Alves cross from the right.

Barcelona sought for the opener with full force and fresh guys Messi and Neymar continued to torture the Roma defence, coming close.

Radja Nainggolan then gave Roma fans something to cheer about pulling off a half-chance wide from 25 yards.

Szczesny was at it again keeping out a powerful strike from Ivan Rakitic on 16 minutes before Rafinha blazed over a shot from close range soon after.

However, the Poland goalkeeper would be finally beaten in the 26th minute – Neymar applying a cool finish after Jeremy Mathieu had sent a first-time pass into his path from a delightful Messi ball over the top to the left flank.

Lionel Messi could have been shown a red card after the Argentine appearred to drive his head into that of Yanga-Mbiwa and, he was given a yellow card instead and went on to double Barca’s advantage with a driven effort from the edge of the box in the 41st minute.

The second half was less interesting after Barca made a lot of substitutions taking off the MSN trident but the goals weren’t over yet.

Ivan Rakitic fired a rocket of an effort into the top left-hand corner of the net from 25 yards on 66 minutes to round up the scoring.

One highlight of the game was the introduction of Pedro Rodriguez who was likely playing his final game for Barca. His name was chanted by Barcelona fans. The star is likely to move to Manchester United in the coming days.

Jordi Alba picked up a knock later in the game and will miss the Uefa Super Cup clash against Sevilla next Tuesday.