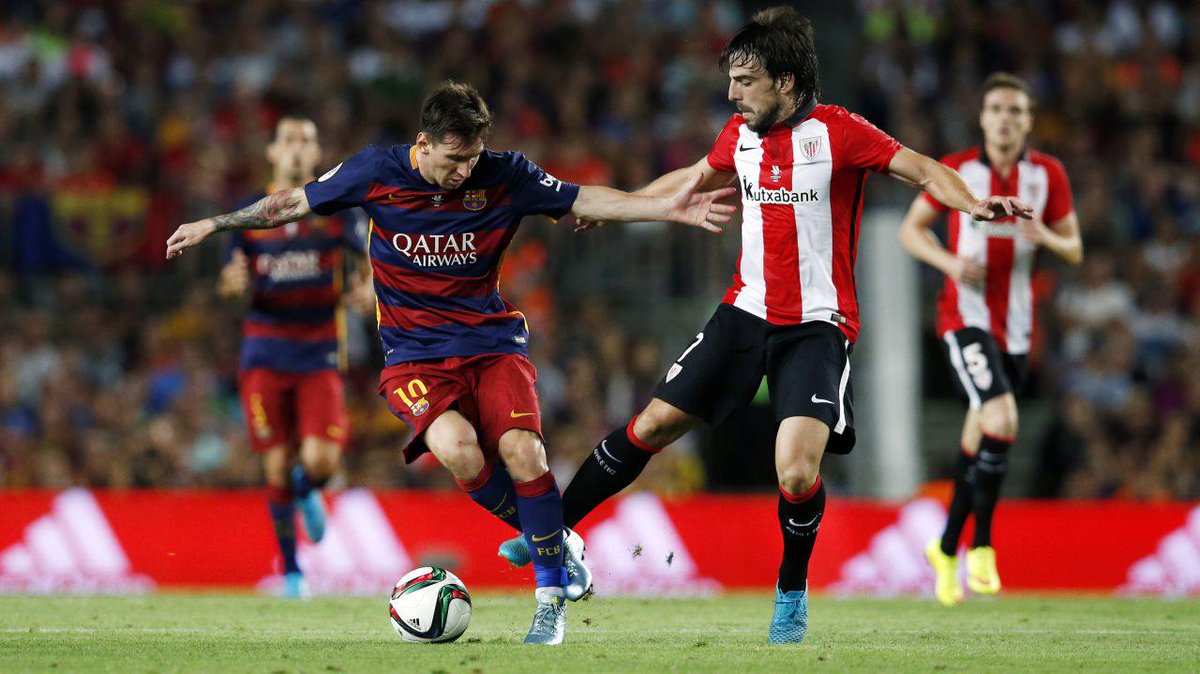 Barcelona’s hopes of winning the Sextuple in 2015 have been terminated after they lost the Spanish Super Cup to Athletic Bilbao 5-1 on aggregate following a 1-1 draw at the Camp Nou.

Barcelona played well but Gerard Pique was bizarrely sent off for protesting at linesman as the Basque visitors earned their first piece of silverware since 1984.

Kudos should be given them for holding out the wrath of Luis Suarez and Lionel Messi, though both players combined for the Argentine to open the scoring at the stroke of half time.

After a 4-0 battering at the San Mames, Luis Enrique knew his side were up for an herculean task and unsurprisingly picked his best possible line-up with Claudio Bravo starting in goal and Pique, Mascherano, Rakitic, Iniesta, Mathieu and Busquets starting this time.

As expected, Barcelona started the pressing from the first minute and they were presented with the first real chance of the game when Pedro’s strike deflected over the bar and Gerard Pique struck the crossbar from close range from the resulting corner.

Barcelona continued dominating possession but couldn’t get that all important goal as the Bilbao defence was ready to offload everything thrown at them.

Athletic Bilbao could have taken the lead through when Pedro mistakenly gave the ball away to Javier Eraso. The player did well to beat Mascherano but pummelled his strike into the side netting when in on Claudio Bravo’s goal, a lucky escape for Barça there.

Barça continued to create half-chances as they sought for an opener with Pedro Rodriguez and Andres Iniesta coming close moments later.

The goal would finally come for Barcelona as Lionel Messi broke the deadlock on the stroke of halftime. Ivan Rakitic played a delightful ball to Luis Suarez after great work from Javier Mascherano found the Croatian. Suarez did well to chest down beautifully for Messi who controlled the ball before firing beyond Gorka Iraizoz on 43 minutes.

The first half ended 1-0 in favour of the Catalans but Pedro was booked after going head-to-head with Gorka Iraizoz on 45 minutes.

Barcelona started the second half determined to get three goals but their moves were constantly denied by the flag of the linesman that it frustrated the players.

Pique didn’t take it lightly and charged towards the linesman to protest after an Aduriz Chance was kept out by Bravo, arguing that the forward should have been called for offside too.

The referee of the game Carlos Velasco Carballo thought it was too aggressive and nonchalant from the defender and he gave Pique a straight red card, reducing the Catalans to ten men.

Getting three goals would not be easy for Barça, and getting them with ten men will be more difficult. Luis Enrique threw in young forwards Munir and Sandro for Rakitic and Pedro but it changed nothing.

Aritz Aduriz, the hat-trick hero from the first leg destroyed Barça plans as he scored an equaliser with quarter of an hour to go. Poor defending from Jeremy Mathieu put the striker clear whose first shot was saved by Bravo before firing home the rebound to give the Basques their first major trophy in 21 years.

Barcelona tried to at least get a win but all proved futile as the game ended 1-1 giving Bilbao a 5-1 aggregate win to be crowned Spanish Super Cup champions of 2015.

Defeat means there will be no Sextuplet for Barça this year but they will hope to get 5 out of six in December’s club world cup campaign. However, they must first put themselves together as a trip to the San Mames, where they were beaten 4-0, is their next challenge as they begin the quest to defend their Liga title next week.