25 Barca Players In Tbilisi For Uefa Super Cup; No Neymar 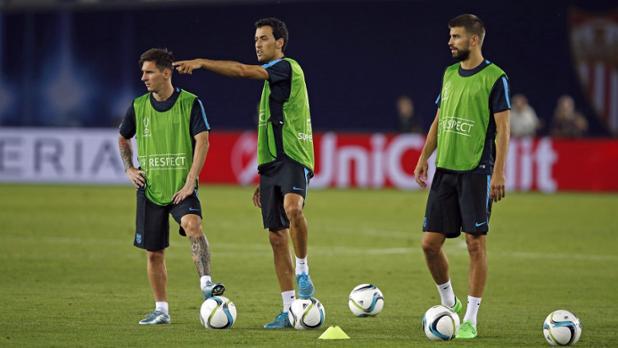 25 Barca players were have arrived in Tbilis, Georgia as the Catalans prepare for a scintillating clash against Spanish rivals Sevilla in the European Super Cup.

The squad include all Barça’s first team players with only Neymar being the only player left out due to his recent contact of Mumps.

Youngsters Alen Halilovic, Sandro Ramirez and Munir El Haddadi are all in the squad with new arrivals Arda Turan and Aleix Vidal also making the trip.

However, some of these players cited will not be able to play a part in Super Cup final despite being included in the squad. Adriano, Douglas and Jordi Alba are ruled out through injureies and Aleix Vidal and Arda Turan are ineligible due to Ban.

The team travelled on Monday morning and had already had their first training session at the Boris Paichadze stadium, the venue for the 2015 Uefa Super Cup. The game kicks-off at 8:00pm CET on Tuesday, August 11.