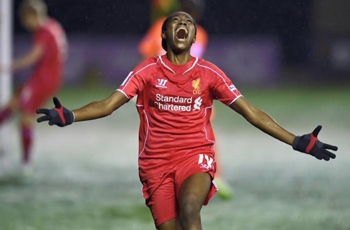 Super Falcons striker Asisat Oshoala’s late strike sealed a 3-1 win for Liverpool Ladies over Arsenal Ladies in an FA Women’s Super League clash on Sunday.
Liverpool Ladies opened scoring through Fara William.
Becky Easton doubled the lead for the Reds in the second half after connecting with a William corner-kick.
Natalia Pablos pulled one back for the Arsenal Ladies, but it was Oshoala who decided the game when she struck in the 86th minute.
The former Rivers Angels striker was then replaced a minute later after scoring.
Oshoala represented Nigeria at this year’s FIFA Women’s World Cup in Canada where she scored just one goal in the Falcons 3-3 draw against Sweden.
She is expected to lead Nigeria’s attack at the 11th All Africa Games in Brazzaville, Congo.-Complete Sports
Tags: NewsNigerians AbroadOshoala