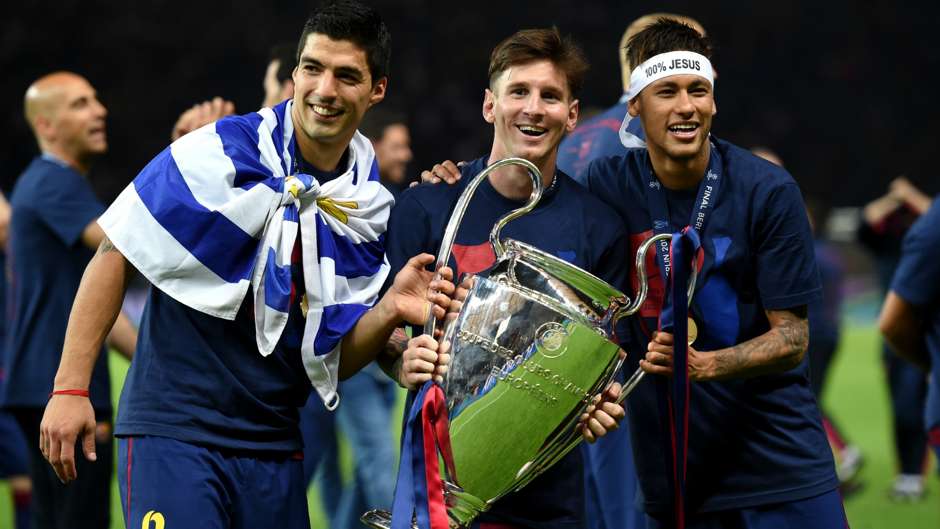 FC Barcelona deadly trident Lionel Messi, Neymar Jr and Luis Suarez have all been nominated for the 2014-2015 Uefa’s Best Player in Europe Award.

The trio had a wonderful season notching up a total of 122 goals across all competitions despite Luis Suarez not featuring during the early stages of the season through ban.

Their fantastic performance last season helped Barcelona win their second treble and the trio have been dubbed by some as the ‘greatest attacking trident in football’s history.’

Other Barcelona players like Andres Iniesta, Ivan Rakitic, Xavi Hernandez, Javier Mascherano and Marc-Andre ter Stegen were voted for by journalists from each of the 54 national associations of UEFA, but didn’t break into the top 10.

The shock of the whole list is the exclusion of defender Gerard Pique who had a fantastic season with the Catalan giants.

Two Barcelona players have been previous winners of the award since 2011 with Lionel Messi winning it in 2011 and Andres Iniesta in 2012. Franck Ribery won the award in 2013 and Cristiano Ronaldo is the current holder, winning it in 2014.

The final three nominees will be announced on August 12 with the winner emerging on August 28. Lionel Messi is tipped to win the Award after missing out on the past 3 editions.