The Catalans played good football, but were unlucky to have been beaten by the Premier League giants who now sit top of the tournament’s log 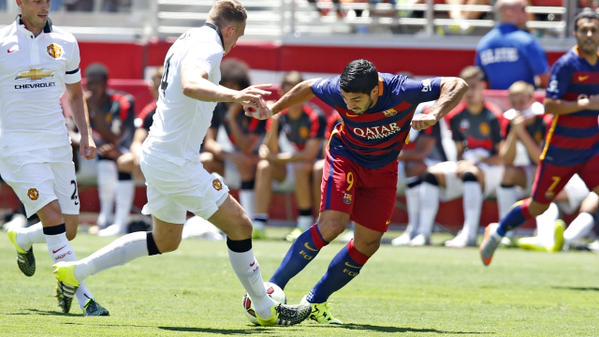 Rafinha Alcantara was the only Barca scorer of the night but goals from Wayne Rooney, Jesse Lingaard and Adnan Januzaj ensured Manchester United take a bit of a revenge for he 2011 UCL final as they beat Barcelona 3-1 in the International Champions Cup.

Barcelona started the game brightly and could have taken the lead twice inside the opening five minutes as Luis Suarez saw his curling free-kick strike the woodwork, and United’s goalkeeper David de Gea was on hand to deny Sergi Roberto minutes later.

United found themselves ahead on 8 minutes when England captain Rooney headed home Ashley Young’s corner after shrugging off the attention of Adriano Correia.

Ashley Young came close to doubling United’s advantage 20 minutes later, but his effort from the edge of the penalty area was superbly saved the inspired Marc Andre Ter Stegen.

Luis Suarez then had a shot clip the post once again towards the end of the first half with the ball already gone past De Gea.

Luis Enrique’s men continued to press after the break, and they thought they were level on the hour through the on-form Luis Suarez after the star beat David de Gea following a neat link up with Pedro only to be flagged off for offside.

Louis Van Gaal substituted all his 11 starters and two minutes after that action, one of the substitutes, Jesse Lingard made it 2-0 in favour of the red devils.

Rafinha finally got a goal back for Barca, firing home a left-foot volley from a Sergi Roberto assist only for Adnan Januzaj to spoil the Barca-party a minute later, restoring United’s two-goal advantage by turning and finishing clinically in stoppage time.

Barcelona face Chelsea and Fiorentina in their final two fixtures of the 2015 International Champions Cup.