The right-back, who could not secure a starting berth at Barcelona joins the Italians on a two-year loan with an option of a permanent deal 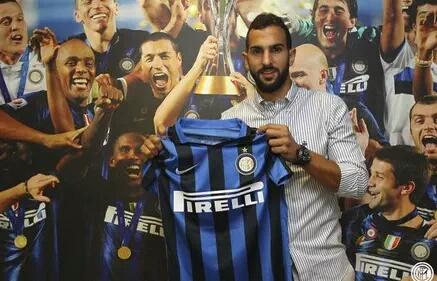 Inter Milan have completed the two-year loan signing of Barcelona right-back Martin Montoya with an option to make the deal permanent in 2017.

The 24-year-old is a product of Barcelona’s youth academy La Masia and broke into the senior squad in 2011 where he has since won lots of trophies but with limited playing time featuring just 12 times for the Catalans in the 2014/2015 season.

An official statement on Inter’s official website confirmed the transfer.

“F.C. Internazionale is delighted to announce that Martin Montoya has joined the club on loan from FC Barcelona. The Nerazzurri have an option to make the deal permanent.

“The defender arrived in Milan to undergo a medical, with the formalities now completed.

“The 24-year-old Spanish defender has won nine trophies over the course of his domestic and international career, and arrives off the back of Barcelona’s successful treble-winning season last term.

“Everyone here at Inter would like to wish Martin a very warm welcome!” the statement read.

The transfer fee of Montoya is believed to be around €1 million and Inter will have to pay €7-8 million if they decide to make the deal permanent.

Montoya is a speedy right-back but has found it hard to cope with competition with Dani Alves, and following the Blaugrana’s acquisition of Aleix Vidal, Montoya believes he has a little chance of featuring for the team as much as he wants and decided to Join the San Siro outfit. Goodluck Martin Montoya!