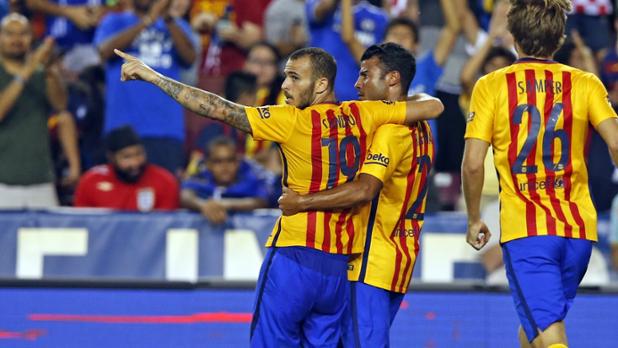 A goalkeeping-error from Jordi Masip allowed Gary Cahill to head home a late equaliser for Chelsea sending the tie into penalties which the London club would end up winning.

Halilovic and Pique both failed to score their kicks with the former hitting the post and the latter’s kick saved by Chelseas’s Thibaut Courtois.

Eden Hazard’s beautiful solo goal split the teams at half-time. The Belgian received the ball from Kurt Zouma near the half-way line, dribbled past 3 markers before holding off Marc Bartra and firing low into the bottom left corner.

Luis Suarez, who was clearly Barca’s best player was in a personal duel with Thibaut Courtois and forced two great saves from the Belgian shot-stopper.

Ivan Rakitic also came close, blazing an effort wide from 12-yards out after a wonderful play by Luis Suarez.

The English champions were the better side in the first half and could have gone further ahead as Diego Costa spurned a one-on-one opportunity, firing his shot wide of the far post after beating off Bartra and Mathieu.

Ter Stegen pulled off a wonderful save from Kurt Zouma’s header after the gigantic defender was fed with a scintillating cross by ex-Barca star Cesc Fabregas.

Oscar then hit the bar from a free-kick with Ter Stegen barely moving a muscle but the young German keeper did well the second time denying the Brazilian a goal from a low shot.

Cesar Azpilicueta’s poor defending aided Suarez in getting the equaliser minutes into the second half with the Uruguayan executing a sublime chip over Courtois. Zouma tried clearing the ball off the line but the goal was given as replays showed the ball had already crossed the goal line.

Barca were soon ahead through youngster Sandro Ramirez as he fired a beatiful curling sho into the top right-hand corner of the net from the left side of the box.

However, the equaliser would come on the 85th minute when Barca’s substitute goalkeeper Jordi Masip rushed out of his line for no reason to allow Gary Cahill head home easily and sent the tie into penalties.

Chelsea converted all their kicks while Pique and Halilovic fluffed their lines for Barca. The Catalans final pre-season game (excluding the Joan Gamper trophy) will be against Fiorentina on 2 August.