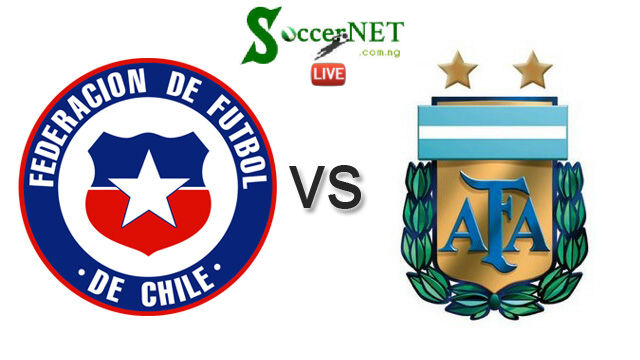 Chile and Argentina will both be looking to end trophy droughts in Santiago on Saturday evening, as these two South American juggernauts are gearing up for the final of the 2015 Copa America.
Follow match Live here on soccernet.com.ng.

27′ Last few minutes. Chile have the ball and have players in the final third, but not too many pushing into the area. The home crowd urge their team on and salute every throw-in, corner and pass which goes their way

26′ PENALTY? Lavezzi goes down under a challenge inside the area as he was trying to tee up a team-mate for a shot, but it doesn’t work out for him as the referee instructs him to get to his feet

24′ Vidal runs into the box but can’t shoot. He tees up Aranguiz instead…who smashes it miles over. At the other end Higuain plays in Lavezzi who goes to ground in the box, but no foul is given.

110′ Sanchez can’t wriggle away from the traffic down the right-hand side and loses the ball. Argentina are back down the other end, but Messi suffers the same fate just inside the D. Story of the night.

96′ Sampaoli pulls the trigger on his second change, bringing on Henriquez for Vargas to freshen up his options in attack. This is the third knockout-stage game at Copa America 2015 that has not been decided in regular time

1′ Start as we mean to go on then. Banega is booked for a trip on Isla after he lost the ball initially.

90′ + 1′ SIDE NETTING! ARGENTINA HAVE MISSED A CHANCE TO WIN IT! Messi orchestrates brilliantly on the break and sprays a ball into the box for Lavezzi. The defence is out of position, but the former Napoli man opts to square it to the far post instead of having a shot. It’s a little too far for Higuain, who can’t convert, possibly hitting the post from the tightest of angles!

90′ Into the 90th we go. Doesn’t look like we’ll have the breakthrough before extra time. It hasn’t been great viewing in this 45 minutes to be honest.

87′ OFFSIDE! Messi suddenly bursts into life to lift the ball over the top. Higuain and Lavezzi are chasing it, and the former is just about onside, but the latter, clearly ahead of the last defender, takes it on instead and finishes, to an obvious flag by the linesman.

86′ Aranguiz clatters through Ever Banega and that’s another yellow.

85′ Now then, trouble here for Rojo as he slides into Isla, with Chile immediately surrounding the referee. He’s already been booked, remember, but Wilmar Roldan, after some deliberation, lets him off with what is surely his final warning. He can’t put a hair out of place now.

77′ Vidal takes a tumble in the area and stays down, but the referee is not interested in his claims for a penalty – and quite rightly so. Still, Chile are starting to click into gear again. It will be interesting to see if they can get Fernandez on the ball and allow him to pull the strings.

70′ Higuain is getting ready to come on for Argentina, as one or two Chile players need some medical attention. Vidal has suffered a bit of a clash of knees.

63′ Chile’s early intent to attack again and again has wilted somewhat in the last 10 minutes. We might be coming to the time of a few substitutions now.

61′ Less than half-an-hour to go now in the Copa America final, and still no goals between Argentina and Chile. Estadio Nacional is still rocking to the rafters, but I’m increasingly getting the feeling that the opener, if there is to be one before the 90 minutes are up, will decide this.

59′ Lavezzi whips in a corner but two Argentina players go up for it at the back post, with Otamendi failing to trouble Bravo with a weak bobble wide. That’s been as good as it has gotten in the second half for La Albiceleste, who are looking desperately short of ideas in the final third. The front three appear so disconnected.

50′ Vidal does well to free Valdivia in the box, but Mascherano does really well on the cover to block the cross coming in.

47′ Early mistake by Otamendi presents Sanchez with the opportunity down the right-hand side. He delays his cross and hangs it to the back post, where Vidal’s header meets it. However, there’s not enough power on the attempt, and Romero, positioned at that post, can catch it without a hitch.

46′ Here we go, the second half begins

45′ + 2′ BRAVO FORCED INTO A SAVE! Pastore sprints down the left and just before he hits the byline, cuts back to take the defender out of the equation. He spots Lavezzi charging into the area and cuts the ball back into his path, but the substitute’s strike is right down the throat of the Barcelona keeper, who pushes it away!

45+1′ Big chance at the other end! Pastore finds room down the left channel, checks back to avoid the defensive tackle and rolls the ball in for Lavezzi—but his shot is straight at Bravo.

45′ Marcelo Diaz becomes the latest booking for hauling back Messi. That’s now three yellow cards in this game – all to players wearing red. The crowd are starting to perceive a bias – as home supporters generally do, and the noise in the stands shows that Wilmar Roldan is not the most popular man in Santiago right now.

43′ Valdivia’s pass is intercepted and Argentina try to release it upfield, but the Chile playmaker does well to race back and clean up his own mess. He then tries to burst back into the final third, but is met by an uncompromising shoulder-barge from Biglia. Valdivia implores the referee to reach for the yellow card, but he’ll have to be content with the free-kick.

40′ Some of Chile’s approach play has been excellent up until they get outside the penalty area, but then the crossing or pass decision isn’t terribly impressive. Vargas overhits a pass out wide to Isla who loses the chance to cross, with two others awaiting a more straight-forward pass from the forward

39′ As a result of the immense pressure and energy for both of these sides, passes that are not hit with the utmost accuracy have tended to be intercepted or blocked here. The match is starting to get bogged down a little in midfield as we approach the half-time break.

37′ An Argentina free-kick is cleared for a corner and from the second set piece Lavezzi sees his shot blocked at close quarters.

32′ Sanchez races through the left side and releases the ball at the right moment for Beausejour. However, the makeshift full-back appeared to have taken his eye of the ball, as he overlapped too late, allowing Zabaleta the time to step in and make the challenge.

30′ Vargas once again picks up the ball in a promising position inside the final third. However, he can’t fully control it and shape to shoot in time, with Rojo standing his ground to rob him of the ball. Vargas goes down clutching his face, but the referee is not interested in hearing his case.

25′ Problems for Argentina. Di Maria embarked on a dribble at speed and he goes down at the end of it—could well be a hamstring strain.

14′ Once again, Chile win the ball inside the Argentina half. Valdivia works a neat pass to Sanchez at the top of the box, but the Arsenal man can’t get any change out of Mascherano, who cuts out the attack with an excellent challenge. Martino’s team are under some real pressure at the moment, and the crowd is getting even more amped – if that were possible!

11′ Decent hit by Vidal—it bounces in front of Romero and he has to make a smart save down to his left. First real chance on goal. Di Maria is then scythed down by Aranguiz and it really should be a booking, but he somehow gets away with it.

8′ Vargas attempts a strike from range but it’s deflected away from danger. Bright start by Chile as they try to attack Argentina early on.

5′ Pastore links with Messi for the first time and those two, excellent in the semis, almost set free Aguero inside the box—but he can’t stretch enough and get a strong shot away.

Game on! #ARGv #CHI. Chile have played some of the most exhilarating football of this tourney, but I’m going with Messi and troops #CA2015 – @ColinUdoh

1′ KICKOFF: Here we go then! The 2015 Copa America final gets underway in Santiago as Argentina kick off in front of a raucous crowd. This really is a huge match for both sides.

ARGENTINA STARTING XI: Romero; Zabaleta, Demichelis, Otamendi, Rojo; Biglia, Mascherano, Pastore; Messi, Aguero, Di Maria
CHILE STARTING XI: Bravo; Isla, Silva, Medel, Beausejour; Aranguiz, Díaz, Vidal, Valdivia; Sanchez, Varga
These two have never met in a Copa America final before, but they have had poor fortunes in the showpiece event in their most recent appearances. Argentina have lost their last two at the hands of Brazil, while Chile have failed to win any of their four appearances in the final.
Share6Tweet4