Anyansi-Agwu to meet Danjuma, Siasia ahead of Olympics qualifiers 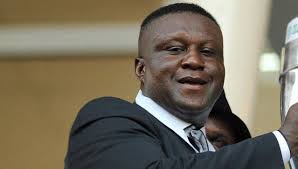 Chairman of the NFF Technical and Development Committee, Chief Felix Anyansi-Agwu will on Wednesday meet with Head Coaches of the Senior Women and the U-23 National Teams, as the NFF adopts a must-win approach to both teams’ Olympic Games qualifying matches away in Bata and Pointe Noire respectively.
The Super Falcons could only draw 1-1 with their counterparts from Equatorial Guinea in their third round, first leg clash in Abuja on Saturday, making the second leg in Bata on Sunday, 2ndAugust a potentially gritty affair.
Siasia’s U-23 wards looked to be cruising to a comfortable win over Congo in their African Championship final round, first leg qualifier in Port Harcourt on Sunday, but then took their feet off the medal to finish with a slim 2-1 win, meaning the return leg away in Congo in two weeks will also be explosive. Both teams are looking for a spot at the year –end African U-23 Championship, where Africa’s flagbearers at next year’s Olympics will emerge.

“We are adopting a must-win approach to both matches. The NFF is taking these two matches as very serious business. You would understand our position if you remember that both teams failed to qualify for the last Olympics in London.
“The NFF will do everything within its power to ensure this does not happen this time. We will put everything into this. We are meeting Chris Danjuma and Samson Siasia for them to tell us what precise support they require to win their matches away from home.”

Anyansi-Agwu confirmed that his deputy, Alhaji Yusuf Ahmed Fresh and National Technical Director, Shaibu Amodu will also be at the meeting.
It is understood that Siasia, whose team is training for the return leg match in Port Harcourt, will fly into Abuja on Wednesday and return same day.
It can be recalled that the Super Falcons and the U-23 boys failed to qualify for the football tournaments of the London 2012 Olympics, with the Falcons failing at the last hurdle against Cameroon, losing on penalties in Yaounde.
The U-23 boys reached the finals of the African Championship in Morocco, but crashed out at the group stage of the competition.
–The NFF