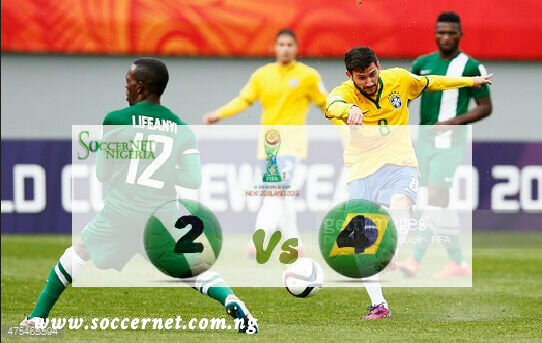 Nigerians have vent varied reactions following the Flying Eagles’ miserable loss to Brazil at the ongoing FIFA U-20 World Cup in New Zealand.

Funny enough, while some are of the view that the introduction of the new administration may have contributed greatly to the loss, many others believe that front men, Taiwo Awoniyi and Joshua Enaholo are to blame for the loss. This now means that the Manu Garba-tutored side has to win their next game to firming up on the team’s opening match loss.

South Africa-based Desmond Kelvin, who surprisingly blamed the emergence of president Muhammadu Buhari for the loss, said: “how do you Nigerians expect the boys to win? You guys drove away GOODLUCK and brought in BADLUCK. We need no “CHANGE” in our football”.

Another commentator by the name Ayuba Ezra, stated that the players were laid-back and so paid dearly for it with the humiliating defeat. She added: “the one-on-one marking disappeared in the second half. But this squad is better than any other squad Naija has ever had! All their goals where exclusive though. thumbs up to them”.

While stating her view in a rather sarcastic way, Chinwe Tony simply noted that, “Change has come” while another Journalist by the name Tom Udo wrote that: “APC has brought us bad luck” amazing isn’t it?

In a critical scrutiny of the encounter, Dikrullahi Kayode Ojo believes that Awoniyi and the goal keeper were the culprits and James Aremu, who claimed to have seen the game live from the arena in New Zealand, wrote: “the second half performance was awful. I think our players allowed the brazilians too much space coupled with goalkeeping error. You can permit this in a game of football and not get punished. But I believe they will bounce back”.

Pascal Ukpong also alleged that the goal keeper spoilt the deal as Mudashiru Lasami Abiola claimed that the loss “is a blessing in this guise”. I wonder what he meant by that.

“That keeper is a wack! Who put him on that plane?” queried another angry Nigerian. “they’ll come good in their next match if the coach doesn’t include him in his selection”.

Ishiiakwu Ukando Adams wrote: “from the little I saw because I woke late, the boys are still promising. The goalie made blunders a lot, while the defence line is just too attack-conscious. These needs to be checked as man-marking disappeared too”.

Now the question still stands: what really went wrong and who is to be blamed?
We can’t deny the fact that the answer to this question must be derived as quickly as possible if the Flying Eagles are going to soar in this tournament.
What do you think went wrong?