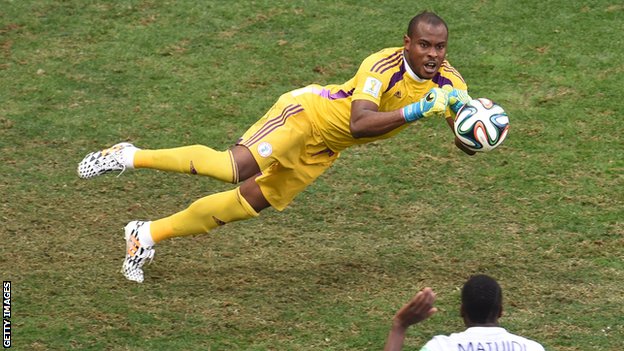 Vincent Enyeama has explained that he was not officially asked to attend a Nigeria Football Federation (NFF) disciplinary committee on Tuesday. The NFF feels that Enyeama was in breach of its code of conduct.
[post_ad]‎
The goalkeeper was said to have made “uncomplimentary remarks” about security in Kaduna ahead of June’s 2017 Africa Cup of Nations qualifier against Chad.
‎
“I respect my country and those in charge of our football, which is why I find the whole thing strange,”he said.
‎
“As the captain I only raised our concerns about the venue before our game which didn’t go down well with the football authority.
“I was told to apologise for my comments, which I did immediately and they told me that’s fine.”
‎
But the 32-year-old, who is the Super Eagles most capped player with 101 appearances, denies he failed to reply to messages from the NFF seeking an explanation for his comments.
‎
“I only received a letter to cautioning me about it [my comments] and to avoid a repeat of such,”he told BBC Sport.
‎
“Personally, as it was resolved in-house I thought that was the end of the matter.
‎
“But I only found out about a disciplinary hearing in the media but I didn’t get any letter to that effect.”
‎
The Lille player could face a lengthy ban for his comments which the NFF feels broke its recent code of conduct signed by the players as well as his failure to attend Tuesday’s hearing.
‎
The NFF executive board will have the final say on any punishments, on a date yet to be decided. It has also been confirmed that the Super Eagles will play their next home 2017 Nations Cup qualifier against Egypt in Kaduna next March.‎