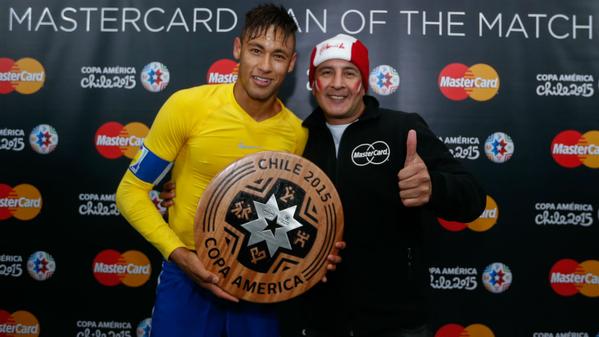 Barcelona forward Neymar put up a belly-filling display on Sunday night to help Brazil defeat Peru 2-1 in their first game of the ongoing Copa America tournament.

The 23-year old scored the equaliser and set up a last-gasp winner for Douglas Costa from a magnificent defence-spliting pass. Apart from these, Neymar made the night a cinema for entertainment with elegant skills and dribbles. It was just a night to catch fun.

Neymar had 93 touches of the ball, more than any other player on the pitch. He nearly made it 2-1 shortly after he had levelled on the fifth minute, only to be denied by a fine clearance off the line, and from that moment until the final whistle, he taught Peru’s defenders a lesson.

On 54 minutes, he rattled the crossbar with a superb strike. He had six shots on the night and five successful dribbles (as many as all of his remaining 10 team-mates managed combined).

Neymar was also a creator, creating four chances for his team-mates, and registering that vital assist in the 92nd minute when he picked out Douglas Costa with an inch-perfect pass from one side of the box to the other, spliting Peru’s 6-man barricade in just a twinkle of an eye.

The goal was the Brazilian’s 44th for his country making him the youngest player ever to reach that number for Brazil.

Neymar was also awarded the Man of the Match for his performance which is no doubt the best by a player in round one of this year’s Copa America campaign.

Brazil take on Colombia on Wednesday night and Neymar will no doubt be central again against Jose Pekerman’s star-studded side, who lost their Group C opener 1-0 to Venezuela on Sunday.