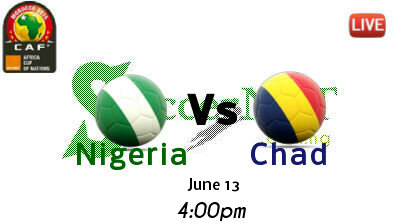 Welcome to soccernet.com.ng’s live coverage of the football Match between Nigeria and Chad taking place at the Ahmadu Bello Stadium, Kaduna, Nigeria.
The Super Eagles return to the pitch for their first competitive game after failing to qualify for the last tournament where they were meant to defend the title won in South Africa in 2013.

90′ + 1′ Rabiu Ibrahim really having a good game with his fine dribbles and great passes. He reminds one of Jay Jay Okocha

90′ Three minutes added time according to the assistant referee

“Its always good to have players on d bench who could change the course of a match, d substitutions (Ighalo & Ibrahim) was the turning point”- @EromoseIleso

84′ John Ogu in for Gbolahan Salami

82′ Asselmo tries a shot at goal but off target. Karl Marx in for Chad as they try a comeback

80′ GOAL! Ighalo converts from the spot.

Gbolahan Salami puts Nigeria ahead. Faces the goalkeeper and places the ball at a difficult angle for Dillah

47′ Salami breaks on the flank. His cross is straight to the Chad keeper.

46′-We’re back underway as the visitors start the second half.

A superb half for Chad, who have been so brave in the first half. Musa and Babatunde Micheal have been in sublime form, popping up all over the pitch though yet to find the back of the net, which could mean more goals in the second half.

40′ Free kick to Chad in a very dangerous position. Taken, lost but get a throw in for their effort

38′ Great Save by Enyeama

34′ What a miss! Gbolahan Salami misses a sitter with Les Sao goalkeeper to beat. Another effort wasted as the game ends towards the first half

“This pitch is POOR! The bumps affected Babatunde there!” [email protected]

“Are Chad buoyed by the recent positive showings by the ‘minnows’ across Africa? Looking lively and proactive here against the Super Eagles!”- Ed Dove

30′ Chad seem to be playing better on the day

22′ Mbaiam gets cautioned and free kick to Nigeria in a very dangerous position. Ahmed Musa takes it and forces the goal keeper to a fine save. Corner to Nigeria

20′ Another effort wasted by Babatunde Micheal. Finds his way into Les Sao’s backline but kicks the ball instead out of play as Chad get a goal kick. Still 0-0 here and the fans are getting nervous

16′ Chad have their first real chance of the game. They made a mince meat of the Eagles defence and almost got the curtain raiser as Omeruo clears the ball away to safety

12′ Great footwork there from Leon Balogun, sets Ahmed Musa up in the front but the CSKA man fails to connect and Chad win possesion agian

7′ The Super Eagles have a free kick, quickly taken and goalkick coming to Chad

0″ Here we go people, the game has begun.

Its a lively stadium here in Kaduna, you can feel the passion of the football loving Nigerians. Everyone is exited.

A very nice day it is in kaduna. The weather is perfect!

-This will be the first ever football match between Nigeria and Chad.
Tags: AFCON
Share6Tweet4