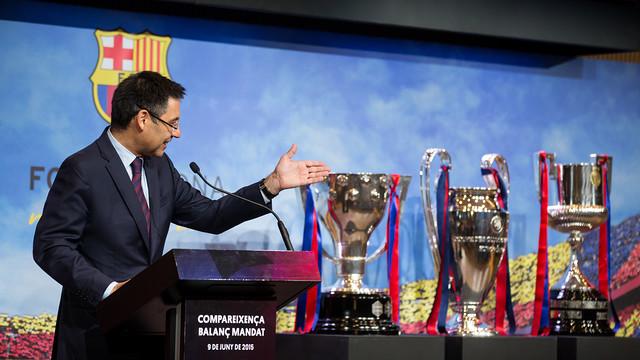 Barcelona will on July 18 decide on who their president will be. Laporta and Benedito, two opposition candidates have already presented some of their ideas for the club, now favourite and semi-incubent, Josep Maria Bartomeu has also presented some of his ideas for the club. FlyBarca presents to you some key quotes from the presidential candidates.

Main Objectives – “We want to close a winning cycle while opening another one just as successful without making noise.”

Past Achievement – ” Under us, Barca became the first club in the world to reach an income of €600 million.”

About Luis Enrique – “He’s on vacation now and he has to rest. Upon his return he has to dedicate himself to football and his players.”

On Meymar’s Transfer Scandal – “It is unfair. We will keep on defending the player because things were done well. I’ve always maintained that the first Neymar case will end in nothing, now there is a new one. The important thing is that, despite some people having a problem with this, Neymar is playing for Barça and will keep doing so for some years. Jurists and scholars have told us that things were done right, that there is no crime. And in any case, we only did what the club’s consultants in terms of fiscal matters have advised us to do.”

Favourites? – “I don’t know if we’re favorites, but I see that people are very happy, and not just because of the treble, and they’re cheering us on.”

On Qatar – “Qatar Airways has been the only one who has presented us with a serious and official offer and the offer has to be presented to the Assembly that has to decide on it in October. If there’s another offer then, the Assembly will analyze them. We have searched for more offers, we have contracted a company that specializes in this aspect and our executives are still working on this. The other offers are inferior and don’t even reach the €40 million figure. The market studies have also told us that no company or country avoids associating itself with us because we have Qatar Airways on the shirt now. There’s absolutely no problem. The debate only exists here, locally.”

On Transfers – “It’s a good thing. Other candidacies are looking at players and so are we. It’s normal because the campaign is long and some names will pop up. It’s normal and good because that generates excitement for the socís.”

On Pogba – “I’m not inside the club right now and I don’t know what is happening, but I’m sure that people are working. Right now I can’t say if €80 million is a small or big figure.”

On Laporta – “There are many candidates and I won’t speak of one or the other. I like that there are plenty of options. He has every right to present himself and defend his ideas. I agree with him on the matters of Cruyff and La Masia, but we must look further than that because we are a club that is the leader in the sport right now and we want Barça to be in the same situation in 2021 too.”

On Laporta’s Accusations Towards Him – “There is no need for me to reply, what I do know is that I have no intention to create division in the club’s ranks. On the contrary, it has been proven that united, we are unstoppable. Creating division is bad politics.”

La Masia, UNICEF And Catalonia – “He [Laporta] said that La Masia isn’t working, but every year there are players who reach the first team. Relationship with Catalunya? We are Catalanists, like we have proved with the Concert for Freedom at the Camp Nou, or the Via Catalana. We have signed the Pact for the Right to Decide. The club is connected to Catalunya, which is our country, but I will never use it for politics, because I value the club’s economic, political and media independence a lot. And we have extended our joint projects with UNICEF and doubled our yearly contribution”