Goals from Rakitic, Suarez and Neymar ensured Barcelona secure a deserved 3-1 win over Juventus to be crowned Champions of the 2014/2015 Uefa Champions League campaign. 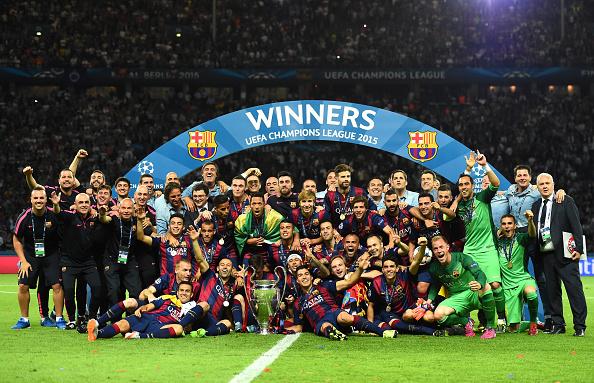 Barcelona have won the 2014/2015 Uefa Champions League trophy after beating Juventus 3-1 in a tense final in Berlin.

Alvaro Morata cancelled out a 4th minute strike from Rakitic to leave the scores level entering the final 25 minutes, but goals from Suarez and Neymar secured a fifth European crown for the Spanish outfit, who have now completed a treble this season for the second time.

The game looked one-sided as Barca came close again in the 13th minute when Dani Alves let fly from inside the box, but Buffon managed to make a beautiful save to deny the Brazilian.

Alvaro Morata had a swing at goal in the 24th minute after some lacklustre Barca defending, but the Spaniard fired wide of the post.

Juventus thought they should have had a penalty 10 minutes before the interval when Alba appeared to have brought down Paul Pogba inside the area, but replays showed that the challenge, which was fairly soft, was actually outside the box.

Luis Suarez came close to scoring a second for Barcelona on 40 minutes, but his low striked just moved past the left upright. Suarez then forced a save from the on-form Buffon as Barca went into the break in control.

Buffon was called upon once more in the early stages of the 2nd half as he did well to save another powerful strike from Suarez.

Lionel Messi sprung into life in the 2nd half and got a shooting chance outside the box, but the Argentine could only fire past the post after excellent work from Neymar and Suarez.

Morata made it 1-1 for Juventus on the 55th minute striking home from close range after Ter Stegen did well to parry a Tevez effort straight into the path of the Spanish striker.

Juventus began to play better and Tevez came close to scoring his 30th goal of the season in the 63rd minute, but the Argentine curled over the crossbar from outside the box.

Moments later, Pogba tested Ter Stegen from distance as Barca’s defence looked very shaky.
Barcelona went ahead for the second time on the 68th minute. Messi started a superb run from the middle of the pitch and fired a powerful shot which Buffon saved, but Suarez was in the right position to shoot home from the rebound.

Barcelona thought they have had another goal in the 71st minute when Neymar headed home from close range, but the goal was controversially disallowed for handball after the Brazilian headed onto his hand.

Juventus continued fighting and almost got the equaliser on the 75th minute after a mis-judgement from Ter Stegen, but Pogba’s headed effort was over the crossbar.

Moments later, Messi fired a free kick over the crossbar, before Xavi came on for his final Barcelona appearance, his 900th career game and a record 151st in the UCL.

Gerard Pique had a glorious chance to kill the game for Barcelona on 81 minutes, but the centre-back fired into the stands after an excellent first time volley-pass from Xavi.

Llorente came on for juventus and immediately called Ter Stegen into action in the final minute of normal time but the German managed to push a rasping effort wide of the post.

The officials gave 5 additional minutes and Juventus sent all their men forward and left their defence vulnerable. They were punished when Barca scored a third in the seventh minute of added time as Neymar converted from inside the box after excellent work from substitute Pedro Rodriguez.

With the triumph, Barcelona became the first team in history to win the treble in two different seasons after their Liga and Copa del Rey win.