by Precious
in News
0
Share on FacebookShare on Twitter
After a glorius triumph in the Liga, Barcelona now shift their focus to tomorrow’s Copa del Rey final. Although the game will be played at the Camp Nou, it won’t be an easy task for La Blaugrana as they will even play as the away team. FlyBarca takes a look as how the game may go as the Catalans look to make it 2/3 in their treble pursuit. 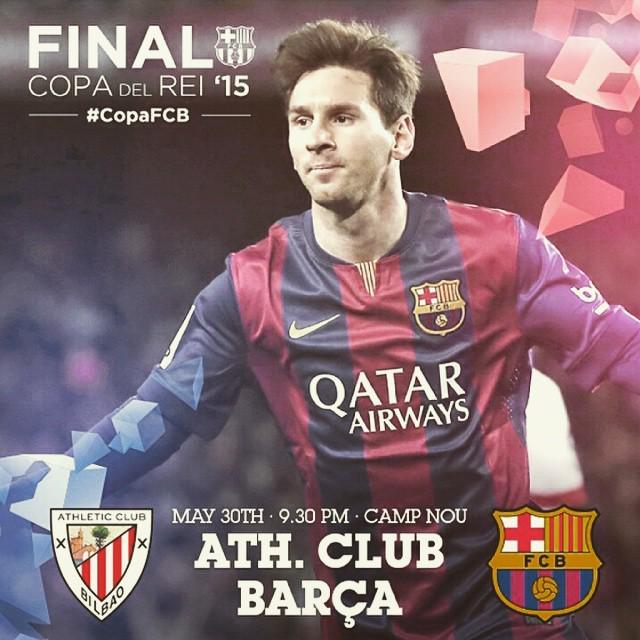 Key stats on Athletic Bilbao vs Barcelona.
Barcelona have played a total of 212 games against Athletic Bilbao winning 103 times, with 35 draws and 74 losses. The Catalans scored 393 goals during this games and conceded 309 keeping 64 Clean Sheets. The last game between the two sides was in La Liga this season with the Blaugranas securing a 5-2 win at the new San Mames with the MSN trio all on target.
Also, Barcelona have played against Athletic Bilbao in 7 previous Copa del Rey finals registering 5 victories and 2 losses.

Barcelona are on a 100% record in this season’s campaign winning all games. Neymar tops the scoring chart for Barca players with 6 goals with Pedro having 5 – Messi 3 – Iniesta 3 – Suarez 2 – S. Roberto 2 and Adriano 2. However, the assist chart is bossed by a more familiar name with Messi having 4 – Suarez 3 – Iniesta 2 – Rafinha 2 – S. Roberto 2 – Alba 2 and Montoya 2.
The GOOD News…
The good news for the Camp Nou outfit is that key striker, Luis Suarez have been declared fit and is available for selection for Luis Enrique in tomorrows game. The Uruguayan was subbed off at half time against Bayern in the UCL semi-final 2nd leg and missed the Catalans last two games. The striker has notched up 24 goals and 20 assists despite being banned for four months during the start of the season.
Verdict…
Although tha game will not be as easy as eating a banana, as Athletic Club have given Barcelona problems in the past, but with the current form of the deadly trio, scoring and assisting at will and the hunger in the Barcelona squad, I tip them to scoop it. 3-1 to Barcelona.
Stats courtesy of: Barca19stats and BarcaStat.