Today In Football History: May 17, Barca Vs Arsenal 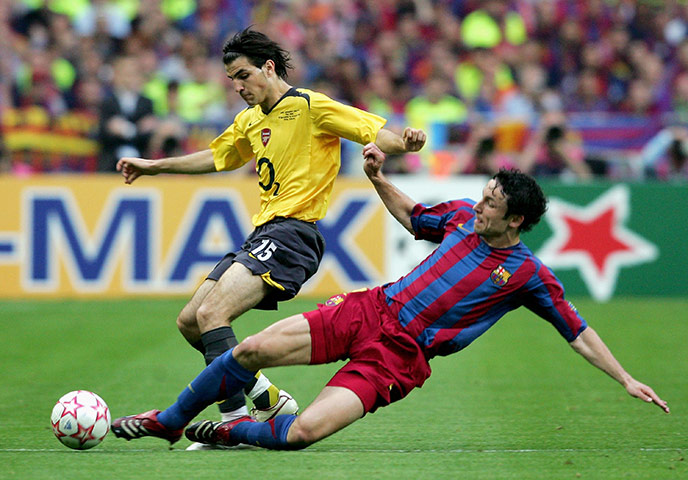 Photo: The Guardian
On 17 May 2006, Barcelona defeated Arsenal 2-1 in the Champions League Final, played at the Stade de France in Paris. It was the second European Cup/Champions League trophy for the Catalonians, who added a third in 2009, a fourth in 2011, and hope to make it five next month.
The match was hyped as featuring two of the sport’s greatest players at the time – Barcelona’s Ronaldinho and Arsenal’s Thierry Henry. But the match’s first goal was scored by Arsenal defender Sol Campbell, who headed in a 35th-minute free-kick to give the Gunners a surprising lead – surprising because the English side were down to ten men after keeper Jens Lehmann had been sent off in the 7th minute for fouling Barça’s Samuel Eto’o outside the box.
Despite being a man down, the Gunners held on to their advantage through the remainder of the first half and deep into the second, while still attacking the Barcelona goal. The next goal, however, was Barcelona’s, as midfielder Andrés Iniesta played a long pass to Eto’o, who scored a 76th-minute equalizer. Four minutes later, a Barcelona cross found second-half substitute Juliano Belletti, who fired the ball through Almunia’s legs for the lead and the win.
Leading up to the match, several rumors circulated about Barcelona’s interest in signing Henry. He eventually signed with them in 2007 and went on to win the Champions League with them in 2009.

Culled From: This day in football history