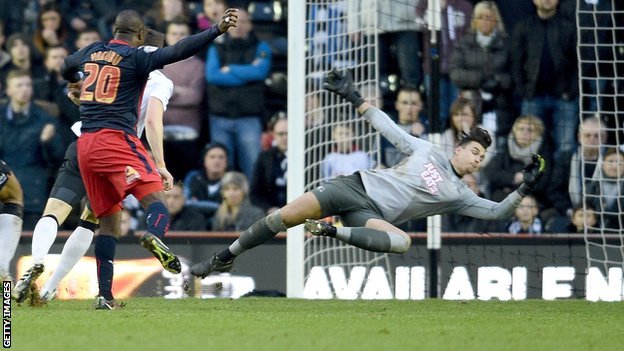 Nigerian striker Yakubu Aiyegbeni scored the winner for Reading in the club’s 2-1 victory over Derby County.
Yakubu netted after 81 minutes as the Royals held out for a priceless win at the iPro Stadium.
His goal arrived just nine minutes after he replaced Jamie Mackie as a second-half substitute.
The veteran showed good strength to hold off chasing Derby County defenders and fired in a low left-footed shot.
It was his first goal in England since May 2012 – for Blackburn against Chelsea – and also his first FA Cup goal in eight years.
His performance thrilled his former teammate at Blackburn Rovers, Jason Roberts, who promptly described him as a striker who will “score you goals.”
“Yakubu (did) really well (to score against Derby). Hal Robson-Kanu slips him in and as soon as it goes into him you know he is going to hit the target with a low shot into the corner.

“That is no surprise to anyone. You may not get him chasing players down, but Yakubu will score you goals,” Roberts said.
Yakuku scored 114 league goals in English football in a nine-year period that saw him turn out for clubs like Portsmouth, Middlesbrough, Everton and Leicester City.