Barcelona will be looking to extend their winning streak to eighth consecutive games in all competitions when they take on Villarreal at the Camp Nou on Sunday. 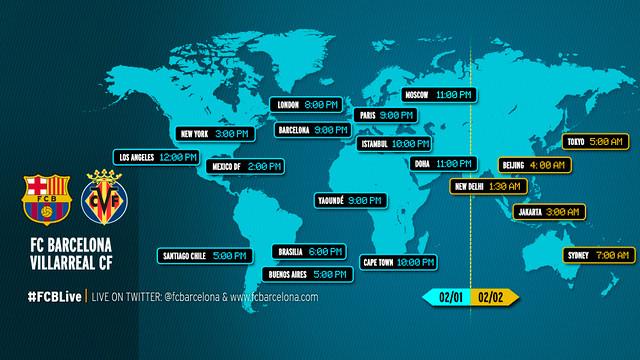 The Catalans will also be seeking to end Villarreal impressive unbeaten run of 18 games in all competitions.
The Blaugranas will enter the game with full confidence after securing a comprehensive third successive victory over Atletico Madrid in midweek to secure a Semi final clash with the Yellow submarines.
Despite their form, Villarreal will surely have a huge force to contend with, with the trio of Messi, Neymar and Suarez all contributing to an attack that has scored 26 goals since the start of 2015.
Barca remain will be happy to welcome back Jeremy Mathieu but will still be without Thomas Vermaelen and Douglas who are both out with injuries. However, goalkeeper Claudio Bravo will return after being left out of Barca’s Copa del Rey triumph against Atletico Madrid.
Villarreal go into the match having put together an excellent run of results that has seen them avoid defeat since November 6, 2014. They will match their longest ever unbeaten run of 11 games in the Liga if the avoid a loss at Camp Nou.
The Yellow Submarine have also kept four clean sheets in a row, and although they are the clear underdogs to earn a result against Barcelona, their team spirit and unity could help them cause a surprise at the Camp Nou as they look to keep in the hunt for fourth place.
New signing Joel Campbell, who has joined on loan from Arsenal as part of outgone player Paulista’s deal, may start on the bench after making his debut in the Copa del Rey victory over Getafe in midweek.