Fiorentina 2-0 Tottenham (agg 3-1): Salah ended the match well as Spurs was crashed out 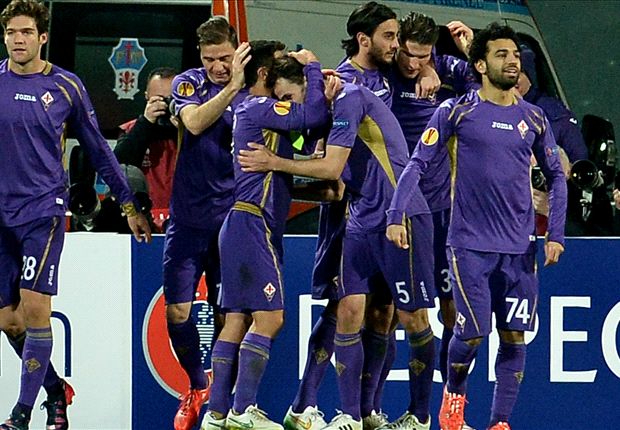 Chelsea loanee Mohamed Salah struck the hammer blow as Fiorentina eliminated a lacklustre Tottenham from the Europa League in Florence.

With the tie marginally in Fiorentina’s favour after a 1-1 draw at White Hart Lane last week, Mauricio Pochettino’s side were made to pay the price for their inability to score away from home.

Had Roberto Soldado not underhit a pass to Nacer Chadli with just Neto in their way during a quick first-half break, the Premier League side may have been able to get on top in the tie.

However, Gomez’s calm finish nine minutes into the second half gave the hosts a platform before Jan Vertonghen afforded Salah a golden opportunity to double the lead 19 minutes from time.

After the Belgian failed to shepherd the ball to Hugo Lloris, Salah stole in and poked the ball home to effectively end the tie and see Vincenzo Montella’s side into the next round.

Pochettino – who named leading scorer Harry Kane on the bench – will hope his side can make amends for a lacklustre showing when they take on Chelsea in Sunday’s League Cup final at Wembley.

Milan Badelj was one of four players brought into Fiorentina’s squad from the first leg, and the midfielder fired the first effort of the game just wide of Lloris’ left-hand post four minutes in.

Fiorentina’s returning goalkeeper Neto – playing his first game since December 21 after a contract dispute – was then called on to gather Erik Lamela’s long-range drive before a trio of attacks from the hosts were cut short by an offside flag.

Prior to Matias Fernandez’s injury-enforced withdrawal, Spurs gradually began to exert themselves and should have led when Soldado burst through on goal following a well-timed Lamela pass.

However, the Spaniard seemed caught in two minds when one-on-one with Chadli alongside him, allowing Neto to extinguish the best chance of the opening half-hour.

And Soldado’s woeful error was punished nine minutes after the interval asGomezlatched on to Badelj’s pass and tucked the ball under the onrushing Lloris.

With the German’s strike piling the pressure on Spurs to get an away goal, Pochettino opted to introduce Kane and winger Andros Townsend off the bench.

While the pair were at the forefront of the visitors’ late yet insufficient pressure, Spurs’ fate was sealed whenSalahseized on Vertonghen’s error to double Fiorentina’s advantage.

It leaves Montella looking forward to the last-16 draw, while Pochettino and Spurs must refocus ahead of Sunday’s showpiece.