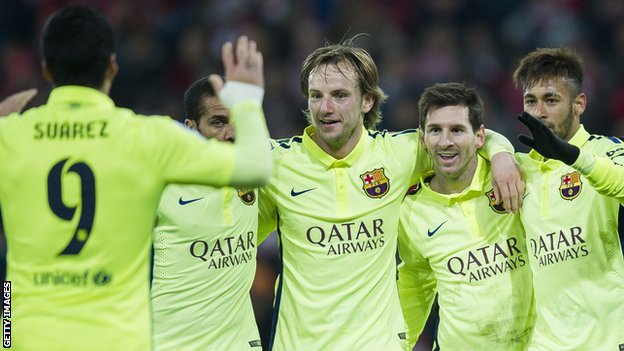 FC Barcelona capped off a fine 5-2 win against Athletic Bilbao to cut the gap on leaders Real Madrid who were ambushed 4-0 by Atletico Madrid to one point. Luis Enrique’s men didn’t have time for jokes as they took the chance to bolster their title hopes with Neymar, Messi and Suarez all on the scoresheet.
Barca entered into the the game on a great run of 8 successive wins in all competitions and started the goals-show through the talismanic Lionel Messi whose freekick went past the Athletic goalkeeper after a deflection confused him.
Luis Suarez started his hardwork once again and was handsomely rewarded with a goal after the Uruguayan got a Messi pass and fired a first time shot from outside the box which was powerful enough to beat Iraizoz.
Bilbao on the other hand were ready were ready to pull a fight and therefore started the second half as the brighter side. They finally pulled one back after Mikel Rico was on hand to tap in the rebound after a wonderful reflex save from Claudio Bravo.
However, it looked like that goal provoked Barcelona as they wasted not up to 90 seconds to score their third. Messi’s shot or cross was deflected by De Marcos into his own net to make it 3-1 to the Catalans.
Athletic had barely rested before Barca added a 4th seconds later through the in-form Neymar who scored his 16th League goal of the season. The goal was from a Messi assist that makes the Argentine the all time assist leader in Spain for the past 25 years.
Barca could have added a 5th seconds later through Neymar but it was Athletic who scored as Artiz Aduriz beat Claudio Bravo to register his 100th goal in Spanish football.
The game became more settled afterwards but Athletic Bilbao were reduced to 10 men when Etxeita nearly committed murder on Suarez. Pedro then finished up the burial as he was on hand to tap in from a Busquets assist to make it 5-2.
Neymar had the chance to make it 6 for the night but was denied by Iraizoz in a one on one situation.
With the win, Barcelona remains in huge contention to lift the trophy as they are now just one point behind Real Madrid on 53 points.
The Blaugranas now will focus on their midweek Copa semi final tie with Villarreal and the next Liga game against Levante on Sunday both at the Camp Nou.