Nigeria 2-0 Yemen : A quick look at the game 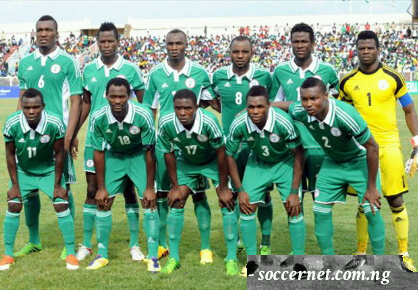 Nigeria’s Super Eagles finished their Middle East tour with a 2-0 win over the Yemeni national team at the Sevens Stadium in Dubai.
Two goals in each half from Mfon Udoh and defender Azubuike Egwuekwe gave the African champions a 2-0 win in the international friendly on Saturday.
Nigeria assistant coach, Daniel Amokachi, made only one change from the team that lost 1-0 to Ivory Coast as Steven Ukoh came in for his first international start for the crocked Kingsley Sokari who failed to recover from his ankle knock.
The Super Eagles had a flurry of chances in the opening exchanges but could not convert most of the chances that their way.
Nelson Ogbonnaya was the main man in the Nigeria defence as he thwarted the efforts of the Yemeni attack led by Yasser Al Gabr.
The Super Eagles eventually made their domination pay in the 25th minute as Mfon Udoh broke his international duck with a well taken goal to put Nigeria in the lead.
Warri Wolves forward Stanley Dimgba was a delight to watch on the right for Nigeria as he constant tormented the Yemeni defence as the first half came to a close.
Yemen came out fighting in the second half and created chances of their own through Motaz Qaid and Mohammed Boqshan, but rarely troubled Chigozie Agbim in goal for Nigeria.
The Eagles kept on piling the pressure in the second half and deservedly doubled their lead when giant defender, Egwuekwe, made it 2-0 for Nigeria in the 64th minute.
Yemen went all out to get a consolation but the Eagles held firm to nick their first win of 2015.
Line-up
Nigeria line up: Chigozie Agbim, Azubuike Egwuekwe, Chima Akas, Joseph Nathaniel, Mohammed Gambo, Rabiu Ali, Stanley Dimgba, Solomon Kwambe, Steve Ukoh,Nelson Ogbonnaya, Joseph Nathaniel
Yemen line-up: Abdulwasea Al Matari, Ahmed Al Hifi, Yaser Al Gabr, Waleed Al Hubaishi, Mudir Abdurabu, Motaz Qaid, Mohammed Boqshan, Mohammed Ayash, Mohammed Al Ghanei, Hamada Al Zubairi, Ala’a Al Sasi
Tags: NewsNigeria
Share6Tweet4