The Blaugranas blew the chance to go top when they lost to Real Sociedad 1-0 at the Anoeta last week. However, Luis Enrique’s men bounced back from the defeat by flushing Elche 5-0 in the Copa del Rey in Midweek. Now, the Catalans are fazed with a difficult task, in which they MUST overcome, a win against the Mighty Atleti. 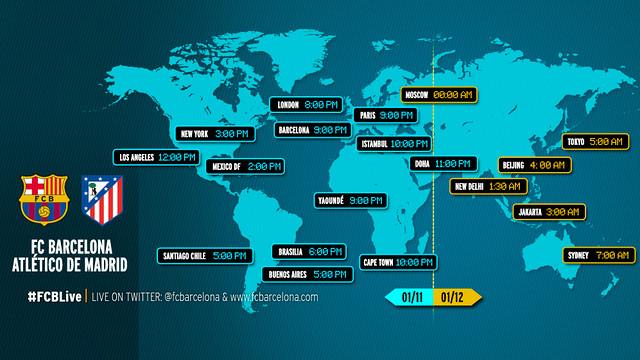 Both sides encounter of recent have always produced a tough scene. Last season, they faced each other 6 times with 5 of the games ending in draws and just one win for Atletico which saw FC Barcelona knocked out of the UEFA Champions League.
The last fixture between these two teams will never be forgotten, it was a total title decider which ended 1-1 to make sure Atleti are crowned Champions for the first time since 1996.
Although, the visitors lost a lot of their key players who were influential for last season’s triumph, Diego Simeone’s squad is still amazing, defeating rivals Real Madrid 3 consecutive times this season, of which the most recent was a 2-0 win in the Copa first Leg.
With stars such as Thiubaut Courtois, Felipe Luis and Diego Costa leaving for Chelsea, Simeone has efficiently made their replacements by bringing in Mario Mandzukic, Antoine Griezmann, Moya and legend, Fernando Torres who may feature today.
Barcelona on the other hand will look to the deadly trio of Messi, Neymar and Suarez who all scored in midweek to deliver as the trio are beginning to click.
The Catalans will be without skipper Xavi Hernandez who is not fit with Jeremy Mathieu doubtful for the clash.