Halilovic Strike Secures All Three Points For Barca B

A second half strike from youngster Alen Halilovic gives FC Barcelona B their first victory in seven weeks.
After a heroic display from goal keeper Adrian Ortola to keep Barca B in the game, Alen Halilovic struck in the 63rd minute to ensure a scrappy win for the Catalans. 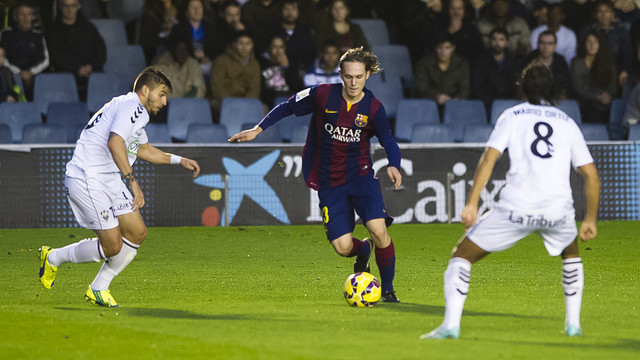 Girona FC: Becerra, Cifuentes (Coris 80′), Ramalho, Richy, Lejeune, Bigas (Aday 71′), Pere Pons, Àlex Granell, Felipe (Christian Alfonso 80′), Mata, Fran Sandaza.
Barça B: Adrian Ortolá, Diagné, Edgar Ié, Mackey Bagnack, Robert Costa, Pol Calvet (Sergi Samper 45′), Gumbau, Alen Halilovic (Babunski 89′), Adama Traore, Jean Marie Dongou, Sandro Ramirez (Joan Román 85′).
Goal: 0-1 Halilovic (63′).
Referee: Ricardo De Burgos Bengoetxea.
Barça B was far from their best in the first half as Girona totally controlled the game. Bigas hit the crossbar just two minutes in the game, and six minutes later, Mata almost broke the deadlock from outside the area, but Ortolá saved his shot just when it looked to be going in.
Barça, however, were able to generate some opportunities of their own. Adama beat three defenders and came into the area, but there was nobody there to help him finish. Girona continued with the same intensity and had two more chances to light up the scoreboard. First, Lejeune headed off a corner kick but was denied by the heroic Ortolá. Then the Barca B shot stopper denied Sandaza in a one on one situation.
Barça then changed pattern by relying on counter attacks. Sandro’s quick feet led to their clearest chance as he found a closing of Dongou, whose shot was saved. The rebound went to Adama, who fired a shot but missed.
Sergi Samper came on in midfield after the break but the team still could not control the ball with Girona continuing on with the same intensity they showed in the first half. The home side could have gone ahead on multiple occasions. Mata missed a great opportunity, and two minutes later Ramalho’s shot hit the post.
Eusebio’s men would have been comfortable with a draw but took the lead just after the hour mark through Alen Halilovic’s beauty. The Croatian midfielder picked the ball up in midfield, carried it for 30 meters before breaking down two defenders and sending a powerful shot with his left foot from the edge of the area that was impossible to stop. It was a Messi-esque goal, simply Messi-like that would stand for the remainder of the match, giving Barça B their first win since matchday 9 when they beat Alcorcón at the Miniestadi.