Brown Ideye promised his son a goal in his next game 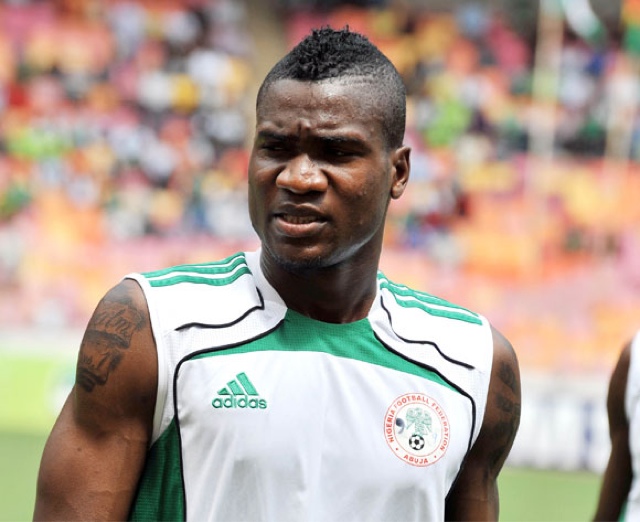 Super Eagles and West Bromwich Albion striker, Brown Ideye has promised his son, Brown Junior a goal if he plays against Queens Park Rangers.
The official club website reports that the Nigeria international, Brown Ideye promised his son a goal in his next outing. The Nigerian is yet to score in the Premier League since he joined West Brom but the comfort of having his family around him will help him adjust to life in England.

Ideye now hopes to reward his son with a goal if he gets to play a part when West Bromwich Albion face Queens Park Rangers on Saturday.
“It is very important for me to have my family here. I am happy about that things are working out for me said Ideye.
“He (Brown Junior) always wanted to see the dressing rooms so I had to take him in to see it. He is happy that we won but he was disappointed that I didn’t score, so I have told him I will score next time.

Ideye who scored thirty three goals in seventy four games while at his previous club in Ukraine, Dynamo Kyiv got his first Premier League start and he was pleased his team got the maximum point.
“I knew how important the game was for us as players and also for the fans, so I am very happy that we won because I couldn’t imagine not winning. I was happy that I was in the first XI. I was always hungry to start for West Brom and I always give my best. Ideye stated.
“Sometimes it’s difficult but I have to keep on pushing and working hard for the team. I’m getting closer to my best. I have had a lot of things to deal with so I just have to be focused.
Ideye continued “The gaffer said he wanted me to work hard and at times it has been difficult for me to adapt to the system that the team plays. I have to adjust to what I have to do when the team is playing, but right now I think I’m there and I am just working hard now.” Ideye concluded.
[post_ad]