Zidane Is Back As Coaching Ban Is Overturned.

by Biyi Akangbe
in News
0
Real Legend Zinedine Zidane can at last resume his coaching duties with Real Madrid Castilla after his ban was overturned on Friday. 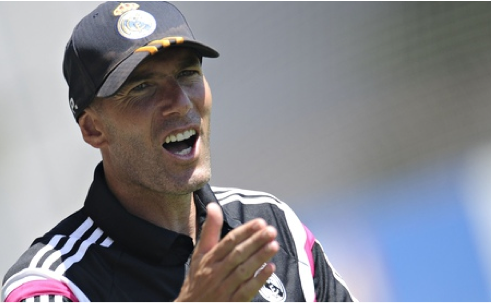 The Spanish Football Federation’s competition committee suspended Zidane last month after deciding the legendary Real Madrid and France playmaker did not hold the requisite qualifications for the role.
Zidane took charge of the club’s B team, Real Madrid Castilla in the close-season after serving as assistant to first team coach Carlo Ancelotti last season, but Spain’s national association of coaches reportedly filed a complaint to the RFEF on the basis that he only carries a UEFA A licence.
In the Spanish system, that represents the equivalent of a Level 2 qualification – one below the requisite grade required to manage in the Segunda B division.
Real immediately came out in vehement support of the 42-year-old, insisting they would “pursue every available legal avenue” to get the RFEF’s decision reversed on the basis that he has the equivalent neecessary qualification in his homeland.
The case then reached Spain’s Administrative Court for Sport (ACS), with the body agreeing to suspend Zidane’s punishment while the appeal process took place.
Moreover, an official statement released by Real on Friday revealed that the ACS has opted to overturn the RFEF’s sanction.
“Real Madrid CF communicates that the ACS has considered the appeal presented by the club, which would allow the Real Madrid Castilla manager and assistant coach, Santiago Sanchez and Zinedine Zidane respectively, to carry out their professional activities.”
Therefore, the three time Ballon d’or winner is now free to coach Castilla in their trip to Tudelano on Sunday.