by Precious
in News
0
FC Barcelona players along with Coach Luis Enrique seems to have gotten back on track. With mouth-watering displays from the players, Barcelona comfortably destroyed APOEL in Cyprus 4-0. With a blistering performance from the whole team, FlyBarca rates the Barcelona players. 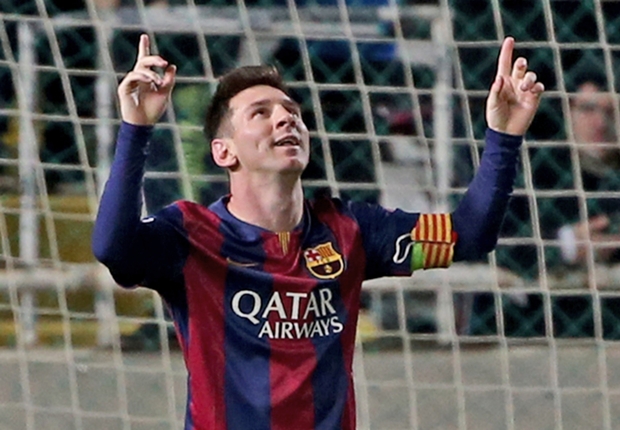 The huge scoreline wasn’t perhaps the talking point of the game, but the mesmerising display from Messi who bagged a hat-trick to break UCL all-time goal record was the talk of the night.
Moreover, Luis Suarez opened his highly-anticipated goal account for the Blaugranas with a well taken strike.
The win saw the old Barca return to their fine playing style of pressing and tiki-taka.

Ter Stegen: 7.0
The German goal keeper didn’t have much to do as usual. However, he made a wonderful diving save to protect his clean sheet. His passes were sublime and accurate.
Dani Alves: 6.5
Not a bad performance from the right back. Although, he wasted shots and will miss the next match courtesy of a yellow card.
Gerard Pique: 7.0
A wonderful performance from the tall man. Kept his line solid throughout the game.
Marc Bartra: 7.0
Like i stated in one of my articles, Bartra Is The Latest Eye Of Barca’s Defence. The young defender made lots of wonderful tackles and was faultless in his passing. ASTONISHING!
Jordi Alba: 7.0
Barca’s Cheetah, as i call him. The pacey full-back was at it again troubling APOEL defenders with his lightening pace. Missed a glorious chance and was later subbed off for Adriano.
Ivan Rakitic: 6.5
Didn’t have his best game, but was crucial to the midfield organisation. Was subbed off for Xavi.
Javier Mascherano: 8.5
The Argentine played in midfield once again and didn’t disappoint. His marking was superb, covered for Pique and was Barca’s best passer of the night. Masche was outstanding.
Rafinha Alcantara: 6.0
Whoops! The youngster set up Messi’s record breaking goal, was lively throughout his time on the pitch but blemished his fine performance by accuring a second yellow. Was sent off!
Pedro Rodriguez: 7.5
Was agile in the game. Could have grabbed a goal from Messi’s assist. However, he set up Messi’s third goal of the night.
Lionel Messi: 10.0
What can i say! The Argentine scored three times to become Champions League record goal scorer with 74 goals. His second hat trick in four days, sorry, his second goal record in four days. 100% King Leo!
Luis Suarez: 9.0
Hurray Luisito! The striker got his first goal for the club with a delightful curling shot to the bottom right corner. Could have gotten more. Was subbed off for Sergio Busquets late on.
SUBS BARCA
Xavi Hernandez: 7.0
His movement was awesome. Was at all the true Xavi. Controlled the midfield well in his record 145th UCL game.
Adriano Correira: 6.5
Came in for Alba in the second half. Was good and optimized the flow of the game.
Sergio Busquets: 6.0
Was brought in for Suarez after Rafinha’s sending off in order to block the midfield. Did it Well.
Did you miss the game? Check Out The Match Report Here.