by Precious
in News
0
Lionel Messi became La Liga’s all-time leading goal scorer with a hat-trick in Barcelona’s 5-1 win over Sevilla at the Camp Nou. 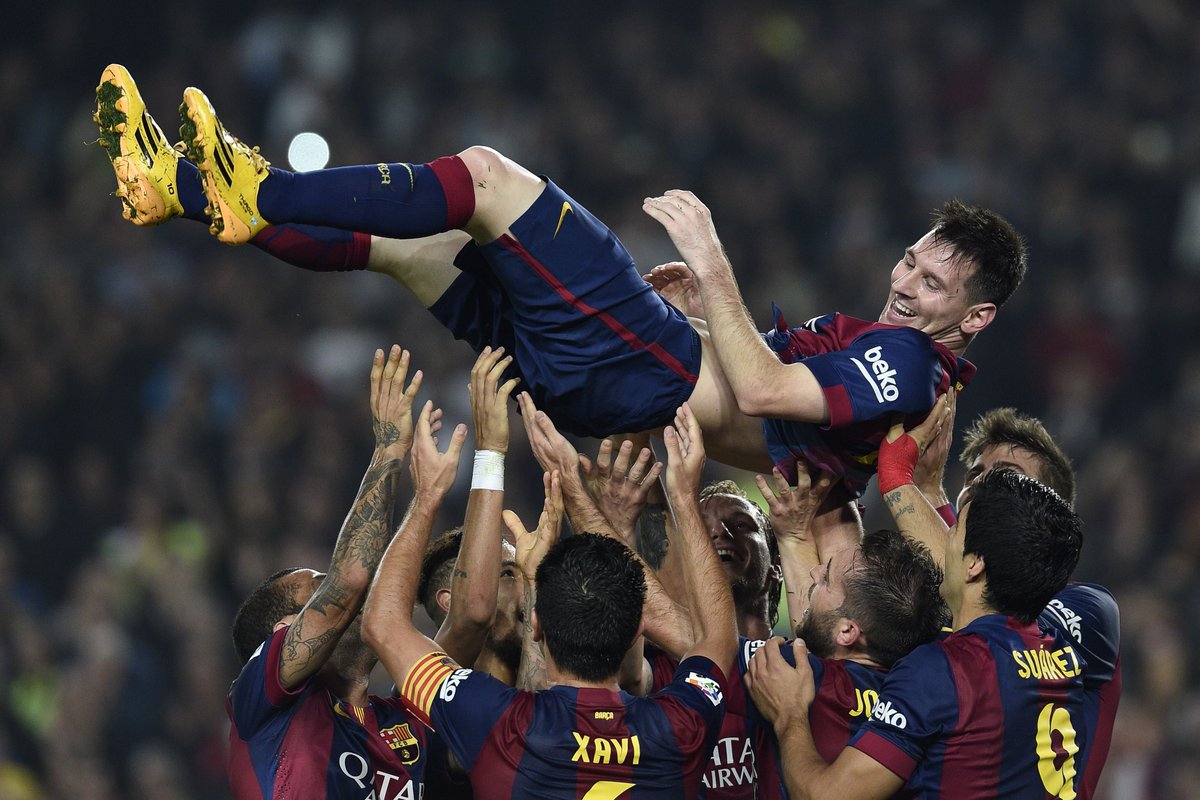 The ever prolific Argentine wizard took his tally of Spanish top-flight goals to 253 with a well-taken hat-trick, moving past former record holder, Telmo Zarra’s who has 251 that had stretched back to 1955.
Messi, who made his Liga debut in 2004, has achieved the feat in 289 appearances – 11 more than the legendary Athletic Bilbao forward Zarra.
The 27-year-old found the net with a sublime, curling freekick in the first half, placing it into the top corner to match the recored, before claiming the landmark outright in the second period as he capped a memorable evening.
Leo’s first ever La Liga goal came as a 17-year-old against Albacete in May 2005, and he had not scored in the league since netting at home to Eibar on October 18, showing how Zarra is full of spirits.
But his wait for another career milestone ended in style as Barca continued their title push with a beautiful performance.
After Messi’s superb set-piece had ensured he would dominate the headlines, Jordi Alba’s own goal at the start of the second half brought the visitors back on track.
Barca wasted no time in replying and went ahead again in the 49th minute as Neymar headed past Sevilla goalkeeper Beto.
Ivan Rakitic, who captained Sevilla to UEFA Europa League glory last season, and was arguable their best player, nodded in a delightful cross from Luis Suarez with 25 minutes to go to make it 3-1.
However, the day was Messi’s as La Pulga slid a shot home from Neymar’s square ball with 18 minutes left to finally overtake Zarra, before completing his hat-trick and rounding off a stunning performance with a solo messi-like goal in the 78th minute.
Initially, the Blaugranas struggled to find a way past Beto, and Messi was presented with an opportunity he would have been expect to bury in the eighth minute but fired a tame shot straight at Sevilla’s Portuguese goalkeeper before Luis Suarez was also denied three minutes later.
But normal order was restored after 21 minutes, as Messi took centre stage. His sublime free-kick from just outside the area curled into the top-left corner, leaving Beto with no chance.
Luis Enrique’s men should have gone into half-time 2-0 up, but Daniel Carrico produced a last-ditch block to deny Alba in the 44th minute and then, from the resulting corner, Beto kept Neymar at bay in a one-on-one situation with his left foot.
Sevilla looked bright at the start of the second half and they were rewarded in the 47th minute as Vitolo skipped past two challenges down the left and saw his cross turned in by Jordi Alba. 1-1.
They were on level terms for just a few moments, though, as Neymar made no mistake with Xavi’s deep free-kick, producing a fine glancing header to make it 2-1.
Sevilla’s forays forward in search of an equaliser ultimately proved to be their undoing, as Barca soon netted their third on the counter-attack, Rakitic heading in Suarez’s cross to effectively end his former team’s chances.
He chose not to celebrate just as he stated before the game.

La Pulga Atomica slotted in an easy finish after good work from Neymar in the 72nd minute, delighting the Camp Nou faithful.
He then added Barca’s fifth, his third and 253rd to round off an historic night, jinking past a couple of challenges before firing low after a clever interchange with Neymar.
The win sees Barca in second position. Still two points behind leaders Real Madrid, who won 4-0 in an earlier fixture.