Keshi Set to get a new contract

Its has been confirmed by NFF officials that Stephen Keshi would continue as coach of the Super Eagles . 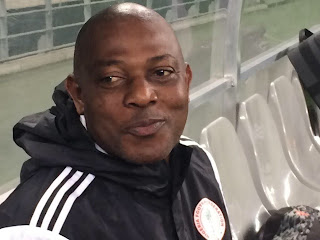 There have been calls for Keshi to be sacked as Super Eagles boss, after the team failed to qualify for the 2015 Africa Cup of Nations tournament in Equatorial Guinea.
Samson Siasia was dismissed after he failed to lead the team to the AFCON 2012 and observers have been clamouring for the same treatment to be meted out on Keshi.
But an executive committee member of the Nigeria Football Federation (NFF), Emeka Inyama, says the Big Boss is set to continue in his role.
“The board has mandated the technical committee to finalise a contract for Keshi as he still remains the coach of Nigeria,” Inyama revealed.
Keshi’s initial three-year contract expired after the 2014 World Cup and he has been working on a match-by-match deal.