by Precious
in News
0
Barcelona first choice Goal Keeper Claudio Bravo have been nominated for the FIFPro World Best Goal Keeper Award along with the four of soccer’s big name goalies. 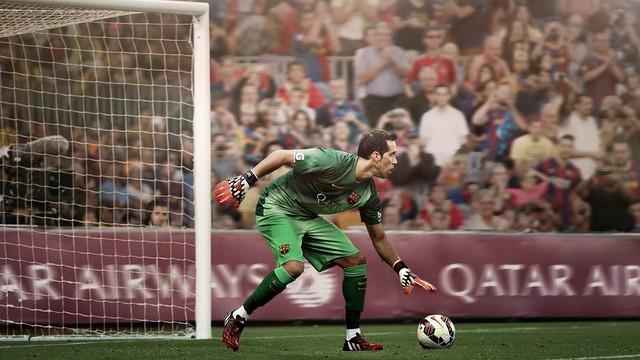 The Chilean shotstopper was the heart of his nation’s world cup success, leading the team to an historic win over Spain with an astonishing performance, producing a string of world class saves coupled with a touch of outstanding leadership.
Bravo’s team crashed out of the competition by a hair’s breathe courtesy of a Penalty-Shootout loss to eventual fourth placed Brazil.
FC Barcelona secured the services of the former Real Sociedad Keeper in the summer for £12 million and the star has obviously lived up to expectations.
Bravo caught the eye of football enthusiasts all over the world when he went eight games without picking the ball from his net for the Blaugranas.
So far the 31 year-old has showed class and prowess giving the Catalans the confidence they lacked during the final stages of last season with the disillusioned Pinto costing them the Liga and Copa del rey trophies with lowkey performances.
Although the inclusion of Claudio Bravo in the shortlist seems much of a surprise but the ever confident goalie has what it takes to be up there as the star is yet to concede a goal that he could be blamed for. If it is said that he doesn’t deserve the nomination, then we surely have something to point out in the nomination of Iker Casillas, who had his worst season last session.
Bravo is joined by the Real Madrid Captain Iker Casillas along with Gianluigi Buffon, Thibaut Courtois and favourite Manuel Neuer. The winner will be announced at the FIFA Ballon d’or gala in January and will feature as the goal keeper in the FIFA FIFPro World XI 2014. Kudos Bravo!