Nigeria has never won the competition, but they would be looking to rewrite history when they travel to India

Retired Super Eagles defender Ifeanyi Udeze believes the Nigeria Under-17 female team can do well at the upcoming FIFA World Cup in India.

The Flamingos have never won the competition, but they would be looking to rewrite history when they take on the rest of the World in India.

Nigeria were drawn in group B, alongside Germany, Chile, and New Zealand. The Flamingos have a pretty decent draw, as none of their group opponents have won the competition since it began in 2008.

The female Under-17 team have have showed promise ahead of the competition, as they beat Galatasaray in their last test match on Sunday.

Ahead of the competition in India, Udeze believes that with what the girls have shown and their confidence in camp, they can do well.

“The team’s first game is against Germany. That will not be an easy one but I like the confidence shown by the team, coaches, and players,” Udeze told Brila FM. 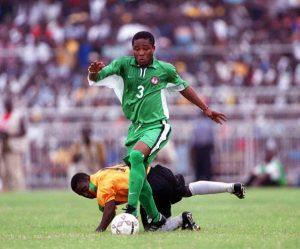 “They have been saying the right things and are also preparing very well in Turkey for the tournament.

“Let them take this same confidence to the tournament in India. I wish them the best.”

The tournament kicks off on the 11th of October, and the Flamingos will begin their campaign on the same day with a fixture against Germany.

Coach Bankole Olowookere would look to push the girls to victory in India.