Injuries are part of the game of football, but no footballer ever wants to get injured.

The slightest sprain or strain on muscles causes varying levels of concerns to footballers and their clubs.

It becomes even more difficult to accept when it recurs and when there’s great competition, it is as unfair as it can get.

At least four players who have been capped or invited by the Super Eagles in the past have sustained season-ending injuries this campaign.

These injuries have left these players devastated and their clubs sad as they are considered key.

From Samson Tijani who suffered a fractured tibia and fibula bone to Jamilu Collins, Sadiq Umar and Taiwo Akinkunmi who all tore their Anterior Cruciate Ligaments, it is far from the ideal season for the Nigerians.

Lots of medical jargon are used in revealing player conditions and identifying lesions. It may be important to have an idea of what each player is dealing with to understand how long they will wait and how much they go through.

Tijani sustained a tibia and fibula fracture while he was on preseason with Red Bull Salzburg.

He suffered the injury in a game against Feyenoord, and is expected to be out for the season or in a best case scenario, be available much later in the season, depending on his recovery and rehabilitation.

“Samson suffered a fractured fibula and tibia in yesterday’s friendly against Feyenoord, and will be out for the remainder of the season.

“We’re saddened to hear about the severity of his injury, and wish him a speedy recovery.

“Get well soon, Samson,” the club said in a statement.

Tibia and fibula fractures are characterized as either low-energy or high-energy. Low-energy, nondisplaced (aligned) fractures, sometimes called toddler’s fractures, occur from minor falls and twisting injuries. High-energy fractures like Tijani’s, such as those caused by serious car accidents or major falls, are more common in older children.

FC Copenhagen last week broke the news that the Nigerian youngster will not play for the rest of the season after suffering a serious knee injury that will keep him out for at least 10 months.

The most common knee injury for footballers is rupture or tear of the anterior Cruciate ligament.

“Amoo unfortunately suffered a serious knee injury in Saturday’s training match against Silkeborg, and after scans and examinations he has unfortunately been ruled out for the rest of the season,” the club stated.

“Amoo now has an operation, then rest and then a long rehabilitation before he can train with the team and play matches again. Altogether, that process will last 9-10 months,’ says chief physician at FCK, Morten Boesen.

“Everyone at FCK wishes Amoo a speedy recovery,” the club said.

In Jamilu Collins’ situation, Cardiff City coach, Steve Morrison revealed that the club will stand by the former Paderborn player as he has shown great quality and is a great person.

“We won’t see him again until next season. It is gutting for the lad, really gutting,”

“We are all here for him. We are going to make the next year the best it can possibly be for him.

“That is something everyone can look forward to next season.”

Sadiq’s case was announced yesterday in a statement by the medical team of Real Sociedad.

“The MRI done this morning shows a rupture of the anterior cruciate ligament. It is a subsidiary lesion of surgical treatment. In the next few days it will be reported.

“Start treatment with physiotherapy and personalized work,” the club declared in a statement.

What is the Anterior Cruciate Ligament (ACL) of the knee?

According to Orthoinfo, the Cruciate ligaments are found inside the knee joint.

The anterior cruciate ligament runs diagonally in the middle of the knee. It prevents the tibia from sliding out in front of the femur, as well as provides rotational stability to the knee. 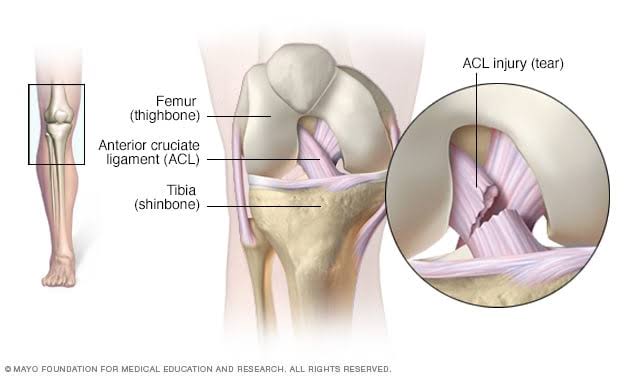 How does an ACL tear or sprain happen?

Footballers’ biggest nemesis, the ACL is a high activity segment of the knee. It is important to a player’s career.

According to Mayo Clinic, an ACL injury is a tear or sprain of the anterior cruciate ligament — one of the strong bands of tissue that help connect your thigh bone (femur) to your shinbone (tibia). ACL injuries most commonly occur during sports that involve sudden stops or changes in direction, jumping and landing — such as football and basketball.

It is hoped that there will be no long-term injury casualty for the Super Eagles again as Jose Peseiro continues his team building.