Antonio Nusa has beginnings similar to Arsenal captain, Martin Odegaard as both players made their debuts early at Norwegian club, Stabæk.

What stands Nusa out is his desire to grow in a direction that fits his profile and steal headlines from bottom to top.

On Tuesday, the UEFA Champions League welcomed a new goalscorer as he further nailed FC Porto’s coffin in a 4-0 drubbing by Club Brugge. By so doing, Nusa became the first player born in 2005 to score in the competition and also became the second youngest scorer in the competition behind Ansu Fati.

Having made his debut for Stabaek at 15, like Odegaard, Nusa’s career has seen him reach heights that were projected for him at his age.

He is the youngest goal scorer in the history of the Norwegian league, only bettered by the Arsenal captain and he’s also the youngest player to score a goal for Club Brugge. The potential for more is alluring.

Nusa is a hybrid of creativity and goalscoring devastation. Pundits in Norway say he’s neither Haaland nor Odegaard, two of the country’s biggest stars, but he shows just as much potential to be in that league soon.

Due to his quality of football, and talent, he’s dubbed the Norwegian Neymar as he’s credited for his pace and decision making.

At just 17, there’s a lot still to happen for the forward and Tuesday’s Champions League 15-minute cameo suggested more of that.

“I like to create chaos,” Nusa told Aftonposten in April 2021. “Neymar is my role model because he creates chaos on the pitch with his dribbling, just like me. He is one of the best in the world.”How is Nusa eligible for Nigeria? 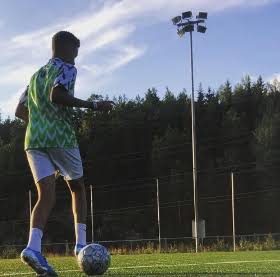 The young forward was born in Norway to a Nigerian father, Eromosele Nosa (spelt Nusa) in Norway and a Norwegian mother.

He’s also eligible to play for Nigeria, and the Norwegian national team.