The Nigerian legend called it quits on his professional career, and he has received a lot of plaudits

Mikel and Terry played together while they were at Chelsea, and they had a lot of memories together. The duo won Chelsea’s first Champions League trophy together, Premier League titles, and FA Cup trophies.

Terry retired in 2018, after 17 years at Chelsea. Meanwhile, Mikel announced his retirement on Tuesday after a career that spanned 17 years.

The 35-year-old retires as one of the most decorated Super Eagles players. Mikel won everything possible during his time at Chelsea in England.

Following his announcement, Mikel has received a lot of plaudits from fans, ex-players – Chelsea teammates, National teammates, and even coaches.

Terry did not mince words as he sent a congratulatory message to his 35-year-old former teammate. 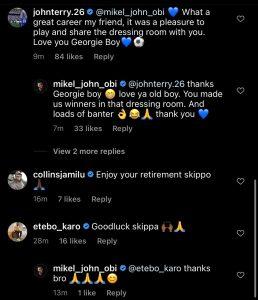 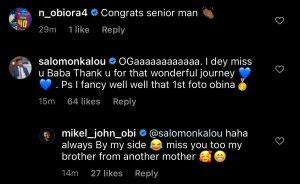 Thanks for the memories. 💙 pic.twitter.com/xK9EnCo4XE

John Mikel Obi won everything for club and country. The most decorated Nigerian footballer.

First saw him as a thing, scraggly and lanky 14 year old at the Police Field near Prisons in Jos.

That boy later captained the @NGSuperEagles and won tons of trophies in his 20 year career.

Today,John Mikel Obi has announced his retirement from football.

Fare thee well, John Mikel Obi. One of Nigeria's GOATs. A midfielder of peerless intelligence, grace and nonchalance. Also a polarizing figure and an emblem of regret for many. Thank you for #3.

You were exceptional on the pitch and Inspirational off the pitch.Happy retirement Skippo. … @mikel_john_obi 👏🏾 pic.twitter.com/YnwJvpCy73

He Made some of us (younger Generation) to Like Chelsea ,he was A Professional to the Core,he gave everything for Club and Country ,he won Everything there is to be won in Club Football. Thank you John Obi Mikel ,we wish you the very best in your Future Endeavour #Legend

@mikel_john_obi
What a player , What a man.
LEGEND 💙
Enjoy retirement 💙@ChelseaFC pic.twitter.com/TfBd7wTeIM

John Mikel Obi was worth the hype.

Thank you for the memories. pic.twitter.com/3sdJDLFhuO