Super Eagles striker has expressed his dissatisfaction and disappointment with Nigerian leaders over their lackadaisical approach to the ongoing ASUU strike.

The Academic Staff Union of Universities has been at loggerheads with the government over the welfare and running of Nigerian Universities for over twenty years. And the status quo has remained unchanged with every government.

ASUU embarked on a one-month warning strike in February. And they had claimed that before the strike, they had reached out to the government but the Muhammadu Buhari-led government did not take them seriously.

It is now July, and almost five months since tertiary institutions have been on lockdown, and all that has come out of the incessant ‘talks’ and ‘negotiations’ is nothing.

Meanwhile, Nigerian leaders even down to local government officials are known to send their children abroad to study undisturbed.

Fatih Karagumruk forward Musa took to Instagram to weigh in on the issue, criticizing the political office holders for their poor attitude. 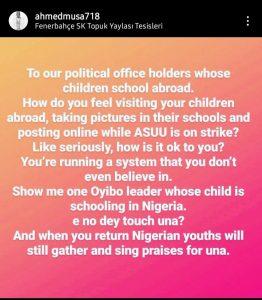 “To our political office holders whose children school abroad.

“How do you feel visiting your children abroad, taking pictures in their schools, and posting online while ASUU is on strike?

“You’re running a system that you don’t believe in. Show me one Oyibo leader whose child is schooling in Nigeria. E no dey touch una?

“And when you return, Nigerian youths will still gather and sing praises for you.”

To buttress their lackadaisical approach to the education sector, erstwhile Minister of state for education, Chukwuemeka Nwajiuba was busy hustling for the presidential ticket of his party during the ASUU strike.

Even the Minister of labour Chris Ngige was doing the same until the last minute when he decided to pull out of the race.

During the period of the ASUU strike, other University unions have also embarked on their own strikes. Senior Staff Association of Nigerian Universities(SSANU), and the Non-academic Staff Union of Universities(NASU) are on strike.

What does ASUU want?

The Academic Staff Union of Universities is not asking for much. The University lecturers are asking for the basics, things that are normal in properly-run climes.

Some of ASUU’s demands include the release of revitalization funds for universities, renegotiation of the 2009 FGN/ASUU agreement, and deployment of the UTAS payment platform for the payment of salaries and allowances of university lecturers.

Many lecturers have complained that they are still paid the same amount they were getting ten years ago. In fact, a professor in Nigeria earns less than £1,000 in salary.

Still, it is hoped that the government will get a change of heart and put an end to the lingering debacle.