Mikel Obi and how Nigerian football has reacted to Ondo killings

After a wicked attack on a Catholic Church in Owo, Ondo State on Sunday led to the death of many people, Nigerian footballers and clubs are reacting to the incident

Former Super Eagles captain, Mikel Obi sent his condolences to the people of Owo in an Instagram post.

“It is sad to hear about the horrible incident that happened in Owo, Ondo State.

”My heart goes out to the families that lost their loved ones to this very sad incident. May God heal our land and grant them the fortitude to bear the loss,” he wrote. 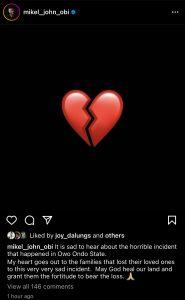 Alex Iwobi also reacted to the incident on Twitter and called for God’s guidance and protection.

Peter Osaze Odemwingie in his message also prayed for the country.

Nigerian Professional Football League side, Plateau Utd prayed for the dead and offered one minute silence before their training session on Monday.

A moment of silence for the victims of #owomassacre before kick off our game with Nasarawa Utd.

Our prayers & thoughts are with the victims' family and all of our people in Owo. Together we stand. We 'll not bow & we shall prevail!✊ pic.twitter.com/pIFWNMV7z0

Our players and coaches observed a minute silence and prayed for the repose of the souls lost in the Owo attack just before the match against @pillarsfc@LMCNPFL #PLAKAN pic.twitter.com/7yKHaG1m67

At least 50 people were killed in St.Francis Catholic Church, Owo, Ondo State on Sunday after terrorists shot sporadically at worshippers.