How MTN is fostering grassroots football development in Nigeria

by Rilwan Balogun
in News
1

When telecommunications giant, MTN discovered the essence of what the NPFL was building with its U-15 tournament, it felt compelled to join in setting a path to the future.

MTN teamed up with NPFL/LA LIGA to continue the development of football talents for Nigeria and to promote grassroots development as that’s where the talents are. It was part of its wide sponsorship of the NFF.

Since 2016/2017 when the competition was first introduced, many players have risen through the ranks to build great football careers and represent various Nigerian national teams.

As part of its corporate social responsibilities, the need to identify an area of interest to Nigerian youths was important and football ticked all these boxes.

The Nigerian Professional Football League has had a downturn in fortunes over the years. From the great days of the 80s and 90s when the league produced the majority of national team players, many of whom were young and spent many years representing the country, the age range of league players has massively increased.

This development affected the growth of Nigerian football and the Super Eagles, as players of respectable quality became more difficult to get.

To plug this hole of the inadequacy of talents coming through the ranks, the NPFL in partnership with La Liga started a talent hunt from the NPFL teams for players not older than 15.

The Golden Eaglets, Nigeria’s U-17 has been a beneficiary of this programme with some players coming through the competition to play in the national team.

One of the biggest beneficiaries of the MTN NPFL/La Liga U-15 tournament is Akinkunmi Amoo. Amoo, who graduated from the 2017 edition. He went on to represent the Nigerian U-17 at the World Youth Championship in 2019. The following three years are perhaps the best testament to the importance of talent discovery.

Amoo joined Swedish club Hammarby and performed excellently, courting positive reviews from some of the world’s best footballers ever including Zlatan Ibrahimovic. He left the club in January as its most sale player ever joining Danish giants, Copenhagen.

He has also gone on to receive invitations to the Super Eagles, which is the highest level for a Nigerian footballer. MTN understands there are more of these wonderful talents out there who need a platform to express their innate potential and tell their stories.

Its inclusive nature – involving all 20 NPFL teams establishes the intention of the organisers to get these talents regardless of place. This competition, including the 2022 edition has helped to inspire some clubs in the country in building their own football academies for the development of young footballers and this was clearly seen at the last tournament at the Remo Stars Stadium, Ikenne.

Playing on some of the best turfs in the country and exposed to modern facilities, we saw an expression of good football education by these young footballers, testifying to their brilliance and driving home the need for better exposure.

The foundation of any football nation is in its youths and there has to be a good blend of public-private investment to make the best of these array of talents.

Shehu Dikko, Second Vice President of the Nigerian Football Federation and Chairman of the League Management Company reiterated the need to discover the future from the present.

”If you want a sustained success, you have to build the foundation for it. This MTN/NPFL/La Liga U-15 tournament is to discover the young stars that will graduate into the U-17 team. I am happy that we have discovered a lot of them here. The duty of the NFF now is to ensure that these boys are well monitored for them to become the Okochas, Kanus and Musas of tomorrow,” he said on the importance of continuing the MTN NPFL/La Liga U-15 Promises.

While the promotion of players and the future is the most important reason for MTN’s involvement in this tournament, the quality of coaching is also a factor that can’t be undermined in a player’s development.

Nigeria has a number of young and old coaches with great quality but many more are waiting to be discovered. The organisers of the competition, being aware of this fact, also ensured coaches gained from the programme with forty coaches of local sides and national teams benefiting from the knowledge and exposure of foreign coaches.

MTN, as sponsors of the NFF considered it worthy to take this benefits beyond male football and venture into the fast-advancing female football. With the likes of Asisat Oshoala, Rasheedat Ajibade and others laying a path of stardom and greatness for the future of female football in the country, MTN also identifies women as key to the growth.

Senior Manager, Sponsorship and Promotion of MTN Nigeria, Osaze Ebueku revealed how significant the company’s support has been to Nigerian football.

“Ofcourse, don’t forget that as partners to NFF, all the assets of the federation including the Falcons, Falconets and Flamingoes are also involved and currently we are supporting all these. We are part of the Aisha Buhari Cup, we were part of the junior women teams qualification, our football is very robust, we are really focusing on the female teams too and they are doing us proud across the world at the moment, so our investment in football is strategic, we are excited to be part of the growth of our football in Nigeria,” he said.

The NPFL/La Liga Promises is just one of the ways MTN helps in charting a fine course to the development of football in the country, but it understands the local professional league is just as important in this process.

Ebueku said MTN’s next focus after the success of the U-15 tournament may be the league. Every nation’s football is best built from its domestic championship and the company understands this. The coming days, Ebueku said holds good promise for Nigerian football. 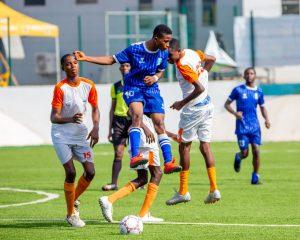 “We are already in it and if that’s where we need to be for our football to develop, why not? It is our commitment, Nigerians are so passionate about football and where the passion is, that’s where we will go. We are taking baby steps, we are already partnering with the NPFL and from there we can take step forward,” he said.