The Year of Cups: At least 15 Nigerian footballers have won titles in 2022

Across various European countries, Nigerians stood up to be counted as they helped their team to league triumphs and cup titles

While some came so close in major European finals and lost by fine margins, others had the stroke of luck to power their fortunes as they made history. 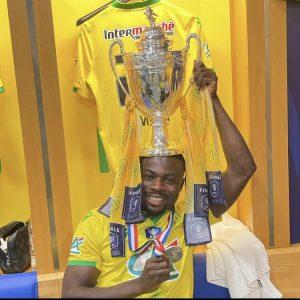 From Moses Simon helping Nantes to their first cup win in two decades in France to Leon Balogun, Calvin Bassey and Joe Aribo’s roles in Rangers’ first Scottish Cup win in 13 years to as far as Cyprus where a decade of emptiness was ended with something to cheer, Nigerians are doing their bit to the story of victory. 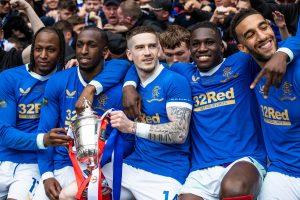 Shehu Abdullahi and Francis Uzoho won the Cypriot Cup as they helped Omonia Nicosia to their first title in 10 years.

A former Plateau United striker, Sunday Adetunji emerged top scorer in Macedonia and won the league title with FK Shkupi and will be guiding his team to Europe next season.

It was an emotional night for me yesterday, a tough night it was.

The team spirit was unprecedented, and the fight was superb. Teammates fought for the badge and my sacrifice.

The fans were unbroken, they chanted all night. That was awesome from the fans, support was massive. pic.twitter.com/pw4C5NDLmZ

We are looking forward to next season, amazing challenges ahead. We want to win the League title, and achieve a season double.

Our target is to get to the group stage of the UEFA Champions League.

It was a dream come alive for all of us. For the fans, THANK YOU! pic.twitter.com/aZ4GZdPAL5

In Portugal, Super Eagles defender, Zaidu Sanusi also celebrated a double as he scored the title-winning goal against Benfica and played in the Taca de Portugal final.

Despite challenges with his fitness, Akinkunmi Amoo also won the Danish League title with FC Copenhagen and may be playing in the Champions League next season.

I am delighted to be part of this historic moment at Copenhagen.

The experience at this iconic club has been interesting.

I am looking forward to next season, to give my best for the badge, win titles and be part of the club history. pic.twitter.com/GF5jiNO8K9

In Austria, Samson Tijani, Amoo’s former U-17 teammate also won the Austrian Bundesliga with Red Bull Salzburg who won their 9th title on the bounce.

While Olanrewaju Kayode assisted the winning goal in the Turkish Cup final win for Sivasspor, his compatriot, Anthony Nwakaeme helped Trabzonspor to their first league title in 38 years. Leke James was also in the Sivasspor team.

In Greece, Henry Onyekuru had the league title as a bright spot in a difficult individual season that saw him score just once.

Asisat Oshoala ended the La Liga Women’s League as top scorer and helped Barcelona Femeni to 30 wins in 30 games. She also won a domestic treble with the Barcelona team.

Victor Moses also added one more to his trophy-laden career as his Russian team, Spartak Moscow won the Russian Cup. 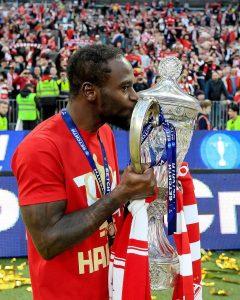 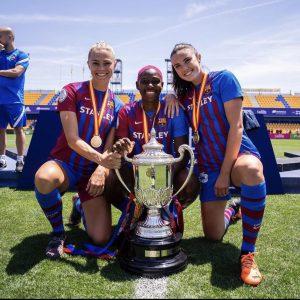 In the Spanish La Liga 2, UD Almeria finished as champions and earned a promotion to La Liga with Sadiq Umar scoring 18 goals in the process.

There were also cup final heartbreaks for a number of Nigerian stars including a UEFA Europa Conference League final loss by Feyenoord and Cyriel Dessers.

Rangers’ trio of Super Eagles stars also lost in the Europa League final in a season that had many Nigerians vie for major titles.