Rashidi Yekini: Ten years since the Goalsfather departure, Nigeria is yet to show enough respect

Tragedy struck on this day ten years ago when Rashidi Yekini’s death was announced. Beautiful memories forged teardrops. The painful reality of an everlasting absence meant lovers will wail. The strong found comfort in the pure ecstasy of experiencing his lifetime, his goals, his patriotism and the sheer beauty of his existence.

Yekini gave Nigerians great times to cherish as football fans. He was to be loved, for all he represented and stood for. Respected by many for his skill, admired by detractors for the strength of his quality, Yekini enjoyed a beautiful football career, achieved his aims and stood for goals.

With 37 goals for the Nigerian national team, nobody has come close to his record as the leading marksman in the history of the Super Eagles, even in death. Yet, he’s hardly respected by the authorities in charge.

Yekini hasn’t been immortalised in any form, ten years since he gave up the ghosts, abandoned to his fate in his latter years, depressed and missing his radiant prime.

At 48, he gave up the ghost, and his burial was evidence of his simplicity as a human. Nothing has been established in his name, nothing has been erected in his memory. His busts or statue is hardly seen anywhere and this explains why modern players may have a rethink about laying it all down on the pitch.

Yekini lived for Nigeria. He spent more than fifteen years in the national team and gave his all.

“There was a time I learnt that my [club] coach was complaining in the press that I went too often to play for Nigeria and that it affected his plans. Do you know what I told him? I told him nobody, repeat nobody, can stop me from playing for my fatherland. This is where my people love me not only because I score goals, but because I am their son. Even if Nigeria has a fixture against ants and cockroaches and I am invited, I will go and play, ” he was quoted as to have said during his time with the national team.

A hero of Nigeria’s first World Cup in USA 1994, he scored the Super Eagles’ first goal at the World Cup. He lived for the greatest moments. The relics of “it’s me! it’s me!” is still one of the greatest sights and sounds seen or heard of any Nigerian in sports.

Photos of Yekini holding the net, eyes-shut, joy-filled and enjoying the immense moment is arguably the best taken of any Nigerian sportsman. 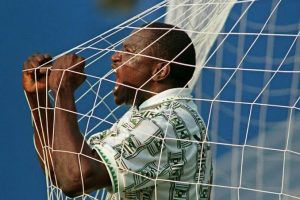 Generations unborn will be told of Yekini’s exploits and they’ll see his passion from a single photo. He’s a legend by every meaning of the word. Yet hardly visibly revered at home.

Yekini didn’t live a perfect life. There were times he lost it at the USA 94 World Cup especially as he couldn’t help Nigeria defeat Italy in the round of 16. It was the beginning of the end for him and marked his gradual exit from the scene. But such was his love for football that he came back many years later to play for Gateway of Abeokuta. Yekini loved football. All he wanted to do was play, shut from the world and all its avarices. He lived a respectable life.

Ten years since his demise, there’s still a lot not done to etch Yekini’s memories in the hearts and minds of those who never saw him. That famous photo of his celebration against Bulgaria still trumps any memory of his presence in a Nigerian jersey, and it’s not good enough.

Heroes are to be remembered. Not forgotten. Never abandoned. Even in death.