Nigeria’s best Under-21 stars in Europe

Nigeria is arguably the most talented team on the continent, with players in some of the top leagues in the world.

Other young stars have shown great promise and could be at the top of their game in very short time.

Soccernet takes a look at some of these young players.

Yusuf is fast making a name for himself in the Belgian Jupiler League. The 21-year-old has been a vital part of Royal Antwerp this season, making 37 appearances in all competitions.

Often operating as a central midfielder, Yusuf is great at breaking down opponents’ play and recycling the ball.

His performances have not gone unnoticed, as Yusuf made the cut for players invited to the Super Eagles for the friendly against Ecuador and Mexico

The former Goteborg man is valued at €2.2million according to transfermakt

Raphael Onyedika
When Frank Onyeka was leaving Midtjylland last summer, he left a massive void to fill. However, another midfield dynamo has quickly stepped up and shown great ability.

Raphael Onyedika has entered the Midtjylland midfield and fit in like a glove. The 21-year-old can play defensive midfield, central midfield, and even defense.

Onyedika has featured in 45 games for Midtjylland, but they sit second on the league table.

The 21-year-old is currently valued at 3million euros.

The former Golden Eaglets star is yet to find his feet in Denmark, but his quality is not in doubt.
A gifted dribbler, the diminutive winger, was arguably the best player for Hammarby last season.

The 19-year-old could have made the Super Eagles squad, but coach Eguavoen could not add him to the contingent because of CAF rules.

However, Amoo finally got his first call up in Nigeria’s unfortunate loss to Ghana in the World Cup qualifier.

The youngster is valued at €4million according to transfermarkt.

The 21-year-old is enjoying his best season yet. Sor left Banik Ostrava for Slavia Prague in the winter transfer window, and he has performed way above expectations.

The 36 Lions product has lightning pace and is a terrific finisher. 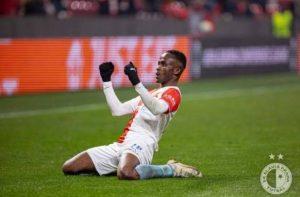 Sor has been vital to Slavia Prague, scoring seven goals and assisting three in 17 appearances. However, most of his strikes came in the Europa Conference League, as his six strikes guided the Czech champions to the quarterfinals, where they lost to Feyenoord.

Samson Tijani
Tijani was Amoo’s teammate in 2019 when they got eliminated from the Under-17 World Cup.

The 19-year-old joined Salzburg in 2020, but he has spent most of his time in loan deals at other clubs.

However, his breakthrough came through this season as he was included in Salzburg’s squad to face Bayern Munich.

Tijani was introduced in the second half of Salzburg’s 7-1 mauling at Bayern Munich.

He has featured in the league for the Austrian champions also and may be in Mathias Jaissle’s plans for next season if Malian international, Mohammed Camara leaves Salzburg.

Tijani has also been invited to the Super Eagles again as he hopes to improve in his two caps with the senior national team.