Burna Boy proves African Giant status again, when will a Nigerian footballer be dubbed one?

Burna Boy made history again when he became the first Nigerian musician to headline one of the greatest show centres in the world – the Madison Square Garden.

He joined some of the greatest musical icons the world has ever seen in achieving this feat.

Burna Boy is an iconoclast, a deviant, a non conforming, Uber-talented music mind with one of the greatest self belief ever seen of a creative. That he has achieved this is phenomenal, in all its meanings.

His achievements underline the excellence in Nigerian music at the moment. One show at a time, Nigerian musicians are taking over the world, and they are doing it without sounding different or making their art a mirror image of any other.

The greatness is engendered by the culture, and respect for its characteristics. There’s uniqueness in this achievement and it’s so good to see.

It’s not just Burna Boy that’s rewriting history. Many others are standing up to be counted, their sounds are becoming global phenomenon and their art is food. This current period used to be all a dream for the earliest conveyor belts of the Nigerian or African content. They saw it coming but didn’t have what the roads wanted. Luckily, their blood and sweats would mean much more, thanks to innovation and advancement of the rest of the world.

Technology, exposure, visibility and the internet have been of immense benefits to the penetration of Nigerian and African art to the rest of the world.

Afrobeats musicians are getting Grammy’s nominations and three of Nigeria’s biggest and best musicians including Burna Boy, Davido and Wizkid have sold some of the biggest show epicentres in the world, all in the last six months. That’s the dream, and Nigerian music is living it.

The prospect the future carries is exceptional as a new generation of musical galaticos are stemming up. The competition for dominance is rife, as many can lay claim to good prominence. It’s a saturated space with open doors and heavens, yet the key to those rooms are in tight opportunities and the ability to take them.

To ignore the importance of the more established foreign music executives in giving opportunities to Nigerians will be colossal. They are a very key part of the story. But to undermine the amount of work put into the growth of the culture by those who have come before now will also be downright unfair.

So good is the local content now that three of the biggest labels in the world have a Nigerian annex, with Nigerians signed on. Some of their top executives are Nigerians and the boardroom, the round table where the decisions are made have locals having a say in the discourse.

For all the talent in the country, the presence of Nigerians in those rooms can’t be undermined. What rooms are the Nigerian football minds in? What’s the difference?

It’s one of the biggest realities of a Nigerian youth. Many kids growing up have balls to kick around in their sitting rooms, compounds or a  bare ground somewhere close to their houses, depending on the level of freedom they get from their parents.

Football is one of the biggest truths of a Nigerian child. You see it everywhere you turn. On your screen, beside your house, in school, everywhere, but that culture and passion for the game is eroding with time. Why?

Many grow up wanting to be football stars, having their father’s names on their backs, getting watched on the TV every week and making good money for themselves and family, but a tonne of these dreams die before they begin. There are little to no opportunities and while this is not exclusive to Nigeria alone, many countries are striving to provide more for their many talents.

The 90s was a generation of greatness for Nigerian football, and many things happened at the time. Unfortunately, many important things didn’t happen at the time also.

Between 1992, when CAF started giving out award for African Footballer of the Year, and 2000, Nigeria won it five times. In the twenty-one years that followed, the closest a Nigerian has come to winning the award has been second place. Some arguments say Okocha should have won at least one of those awards but they are hardly premised on facts and are more based on bias for country.

Nigeria didn’t milk the 90s dominance, visibility and ripple effects enough. The structure to make the most of the great attention the world had on Nigerian talents wasn’t in place. The organisational acumen to feast on that period was absent and greed was in particular, a serious holdback to the progress of Nigerian football.

Nigerians played for some of the biggest clubs in the world in the 90s. Barcelona, Ajax, AC Milan, Inter Milan, Juventus, Arsenal and others had Nigerians at different points. The 2000s was a massive downgrade on that level. The 2010s hardly fared better and the current moment is not even close in magnitude, size, effect or quality. Nigeria won’t be playing at the World Cup later this year and it’s a testament to the dip. 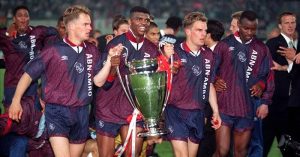 At a time when the rest of the world, nations dubbed as minnows in the past are building frameworks for football development, identifying a common structure across board that can best represent them and give them an identity, Nigerian football talents are still wasting massively. Hardly tapped, barely nurtured and frustrated, many have resorted to other careers and a few have had opportunities to play in lesser known leagues.

The local content is hardly marketable, especially without visibility. The NPFL isn’t shown on any terrestrial broadcast station today. While social media clips occasionally show there could be good quality in the league, its reach is a problem.

The growth of Nigerian music didn’t come from musicians based abroad. Virtually the finest and best music talents in the country today are made in Nigeria. Calls for the development of the NPFL have similar tunes to it. Young players need viable systems to rise, and a platform to showcase their skill.

In terms of innate gifts and potential, a Nigerian is as talented as any in the world, but the fine lines of development make a huge difference in the final equation.

Few Nigerians are taking up executive roles in football clubs and the few who have managed to in the past don’t see a great structure back home to work with. The complaints are the same. There’s no strategy in place.

Players like Mikel Obi in the 2010s and Victor Osimhen now may dare the odds and be in high places but they’re just evidence of what’s possible if the grounds are softer.

The talent market in the world operates without sentiment. As long as the quality is good for business and they can have value for money, and a sustainable investment plan, and structure in place, they’ll come and Nigerian footballers will be in better places. Burna Boy may sell the Madison Square Garden, Davido and Wizkid may sell the O2 Arena but without proper plans and developmental strategy and protocol in place, Nigerian footballers may never become the giants they so much desire to be, can be and should be. And it isn’t any fault of theirs. It takes more than a man to build an empire.