Bassey shines, Kalu sinks: Who are the Super Eagles’ best and worst players in Europe this season?

In the current season, many Super Eagles players rose from their ruins and shone again.

Some established stars at their clubs stamped their feet even better and made the most of their seasons.

The African Cup of Nations came into the fray and that ended on a disappointing note despite showing some early starlights.

These are the best and worst Nigerian footballers in the 2020/21 season;

Victor Osimhen: After an injury-depleted first season in Naples, Osimhen has shown what he can be for Napoli. Fans appreciate his game better now and pundits can’t stop praising him. He’s been the real deal for Napoli all season scoring 13 league goals, and equalling his best European return in the process.

Osimhen’s 25 games this season means he has already gone a step further than last season where he scored 10 goals and had one assist in 24 games. This season, he has shown a better creative side to his game and has garnered 5 assists so far. Osimhen has also shown significant improvements in key areas and his presence has helped Napoli to third on the log, after pushing them far in the title hunt. He was also voted Serie A Player of the Month for March and is on course to win the Napoli Player of the Season award. With the player already committing his future to the club amid Premier League links, the future is bright and promises to be better for Nigeria’s star man.

Moses Simon: The former KRC Genk winger has been fit and available for Nantes this season and has proven to be a key cog in the team.

Antoine Koumbouare has shown great belief in Simon and he has repaid the coach’s fate with Nantes’ first title in 20 years and a European qualification.

In 29 games in the Ligue 1, he has 14 goal contributions scoring 8 times and assisting 6 times. He has been a trustworthy presence for the Yellow Canaries and has shown greatly all season. 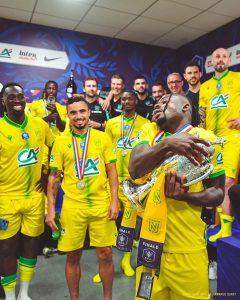 Simon also starred for Nigeria at the 2021 AFCON in Cameroon despite the Super Eagles’ disappointing outing. He was easily Nigeria’s best player at the tournament as he showed a part to his game that was yet to be seen.

Cyriel Dessers: One of Nigeria’s best performers in Europe this season, Dessers has turned the heat on in the Netherlands where he seems to always find his mojo.

He shone at Heracles and earned a move to Genk but was soon loaned back to Feyenoord. Dessers’ first few months at De Kuip saw him play bit-part roles but he has turned the corner and has become a fans’ favourite.

Where he has found prominence this term is in the Europa Conference League where his competition-highest 10 goals in 12 games has powered Feyenoord to the final, their first European final in two decades. 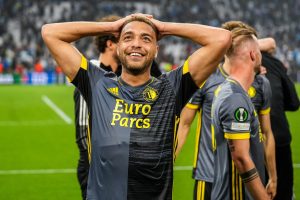 He has also scored eight times in the league and banished PSV’s title hopes last week with a late brace. He has also reached a personal milestone of 100 club career goals in a season that’s looking very different from how it began.

Dessers has also earned a recall to the Super Eagles, and is having the time of his life at the moment.

Calvin Bassey: Bassey got knocked by angry Super Eagles fans for his underwhelming performance in the ill-fated game against Ghana in the 2022 World Cup qualifiers. While his performance that day left little to relish, his club performance is easily the best of any Nigerian defender in Europe.

At 22,the former Leicester defender’s composure and gameplay are impressive and his versatility is of high quality. He has allowed Rangers to tinker this season, playing as a left centre-back and left-back in different games.

His excellence this season has helped the Gers to the final of the Europa League and a potential qualification for next season’s Champions League.

He has played 48 games in all competitions this season and has shone particularly well in Europe where his presence has soldiered Rangers on. He was also voted Rangers Young Player of the Year for his impressive performances.

Anthony Nwakaeme: Trabzonspor has won a first league title in 38 years and they have their Nigerian attacker to thank for his double-double returns this season.

Eleven goals and ten assists means Nwakaeme contributed to 21 goals in 28 league games, helping the Black Sea Storm open a big lead at the top of the log. 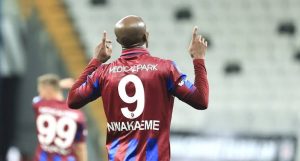 They have also managed to convince the attacker to continue his sojourn in Trabzon after various reported interests within Turkey and abroad.

At 33, Nwakaeme’s performance has been stellar and he has proven to be a reliable channel for the club in one of the biggest periods in their modern history.

A Season To Forget

Samuel Kalu: So tough and unusual Kalu’s season is that he would have been relegated at Bordeaux or Watford. The drop was simply unavoidable for the winger. It reflected his football.

An underwhelming season at Bordeaux saw many Watford fans raise an eyebrow when he signed at Vicarage Road.

Since moving to Watford in January, he has played just three times and didn’t make his full debut until the Hornet’s relegation from the Premier League was confirmed. He had scored one goal and assisted one in 11 games at Bordeaux. 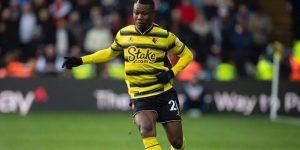 It hasn’t been the best of times for Kalu. The future nonetheless still holds some hope.

Simy Nwankwo: After going neck-to-neck in the Serie A last season with some of the game’s most accomplished marksmen, Simy has been a shadow of his last season’s brilliance.

Since leaving relegated Crotone to join Salernitana at the beginning of this season, he played 19 league games, and scored just once. He assisted two times in the process.

The lanky attacker moved to Parma at the beginning of the year and hasn’t been brilliant also, scoring just once and assisting twice in 12 games.

In comparison with what he managed to achieve last season, where he scored 20 goals in the Serie A, this is nothing near a brilliant season for the Super Eagles forward.

He was a big presence in the Watford defense as they made it back to the Premier League at the beginning of the season but after an opening first half of the season where he got on fans’ bad vibes, Troost-Ekong has barely seen action.

He has however impressed for Nigeria and hasn’t looked out of place in all the games he has played at home. Under Roy Hodgson, Ekong has played just 12 minutes since returning from the AFCON in February.

Interests from abroad and Watford’s relegation suggest the defender may leave at the end of the season as he looks to bounce back, yet again.

Francis Uzoho: From starting in the Spanish top-flight some seasons ago and sparking hopes of seeing a Nigerian goalkeeper at the top, Uzoho is struggling to play in a relegation-battling Cypriot team. It’s a massive decline.

He has played six times in the league this season, and has also had some cup games. Uzoho, however, is capable of much more. Since March, he has played just three games of a possible 12 and has been on the bench for majority of the season.

Henry Onyekuru: Despite Olympiakos emerging Greek champions, Onyekuru barely covered himself in glory, scoring no goal nor recording any assist in 14 league games.

In his 8 games in the Europa League, he failed to score and recorded one assist. It was a generally underwhelming season for the former Galatasaray forward but a league title will help add some sweetener to a very distasteful season.