What next for Watford’s Super Eagles 5 as Hodgson miracle looks tougher?

Watford currently sit a distant 18th on the Premier League table, enough to relegate them back to the EFL at the end of the season.

After a tough season, the Hornets appointed Roy Hodgson to turn the fortunes of the club around but nothing much has changed.

With six points away from safety and two games more than Everton currently occupying the last survival spot, Watford will need six cup final performances, with no blot or grease to avoid the drop.

This reality is stark and a turnaround in fortunes will take a grand miracle.

Watford, however won’t be going down alone should this happen, they have five Nigerians in their fold and may make the drop with them, or not.

After beginning the season like a house on fire, Dennis’ mojo seems to have hit a brickwall in the past few weeks.

A shining light in a dark season for the Hornets, the former Club Brugge attacker is easily one of Watford’s best players this season.

Statistically, he towers above every other player in the team with 10 goals and 5 assists in 30 games.

Having missed just two games all season, his presence is a plus for his marketability. A proof that he’s durable if well-managed.

Dennis is not expected to be short of suitors considering his impressive debut Premier League season, with Leeds United believed to be interested in his services. Newly-promoted teams may also fancy the chances of having him on board.

Of all the Nigerians in the team, he looks the only candidate whose performance is good enough to attract the eyes of other Premier League clubs.

The former Udinese defender is having a tough time in the Premier League. After helping Watford gain promotion last season, he’s had proper game time hard to come by this term, partly due to his inconsistent displays.

Injuries have also been a concern with the defender also rejecting the club’s pleas in January to ditch the AFCON. Since his return from the tournament, he hasn’t kicked a ball in anger in the Premier League.

Troost-Ekong has played 50% of Watford’s 32 league games this season and has a big decision to make. He may fancy following the team back to the Championship should they get relegated or jump ship at the end of the season.

Interests have emerged from the United States but at 28, the Super Eagles assistant captain may still appreciate a career in Europe.

Etebo’s injury-distorted season meant he featured in just seven Premier League games for Watford. He started only four of those and was brought on as substitute in three of them.

His loan move from Stoke City hasn’t gone the way he’d have desired and his time in England isn’t looking like what he hoped. A move away from English football won’t be far from the cards for the former Galatasaray midfielder.

On his day, he’s a player to have for any modest side but his fitness concerns may affect his marketability moving forward.

Since joining in a surprise move from Bordeaux in January, the Super Eagles winger has featured just twice in 12 Premier League games, completing only 46 minutes in the process. 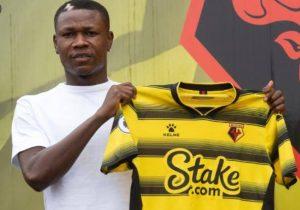 A decent player, injuries have affected Kalu’s progress especially in the last one year. With Championship knocking for Watford, and some of their more consistent performers expected to jump ship, Kalu will settle for the Championship of make another odd move abroad.

Okoye signed for the Hornets in January in a surprise €5m deal. Regarded as one of the young impressive goalkeepers in Europe, he was loaned back to help Sparta Rotterdam in their relegation battle, one his best hasn’t been enough to help.

Okoye’s original owners and part-time holders are both fighting a relegation battle they are more likely to lose than win and this leaves the Nigerian with no choice. After an impressive investment on his services by Watford, he’s expected to join them in the Championship should they go down, but Okoye will be hopeful to see his parent club deliver the unexpected.

Hodgson has never been relegated in the Premier League in his decades of coaching but the last straw may break this old camel’s back.

With Man City, Burnley, Crystal Palace, Everton, Leicester, and Chelsea still in front, it will be a great miracle for Watford to survive the drop.