Nigerian international Calvin Bassey has won Rangers’ Young Player of the Year award after his excellent displays for the Light Blues during the 2021/22 season.

With about a month left to the end of the season, Rangers are still competing for honours on three fronts – the Scottish Premiership, Europa League, and the Scottish Cup.

Bassey has been crucial to those exceptional outings, with his versatility seeing him deployed at centre-back, left full-back, and even left wing-back by former coach Steven Gerrard and current manager Giovanni van Bronckhorst.

Bassey has featured in 11 Europa League games for the Gers, providing one assist. The 22-year-old has been involved in 27 league games for Rangers, including one in the championship round, recording two assists. Bassey added two more assists in three League Cup matches.

And it is no surprise to see the youngster scoop the award for the best young player at the club, which he says is down to his teammates.

“It’s just amazing to win this award and all the hard work I have put in over the past year now recognized,” Bassey told Rangers TV. 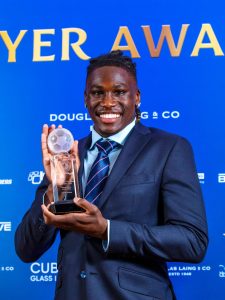 “It’s been amazing, all credit to my teammates and the manager for trusting and believing in me.

“My teammates push me everyday so it’s not just for me but for everyone there working hard with me.

“This is the part of the season where the rewards are given. We are still in the league, Scottish Cup and Europa League, so there is a lot to play for, and we are just focused on taking each stage as it comes to get better and be prepared for the challenges ahead.”

Bassey, with two Super Eagles caps, is the second Nigerian to win Rangers’ best youngster award after Joe Aribo claimed it in the 2019/20 season.