The President of the Nigeria Football Federation(NFF), Amaju Pinnick, has been nominated to be part of the newly established FIFA Working group on Normalisation Committees.

The NFF boss has not been entirely masterful in the running of football in the country, but he keeps getting recognized by CAF and even the highest football governing body, FIFA.

The former Delta State FA Chairman is currently a member of the Organising Committee for FIFA competitions, and he is also a member of the FIFA Council- the highest decision-making body in football. Also, he was the first Vice-president of CAF between 2017 and 2019 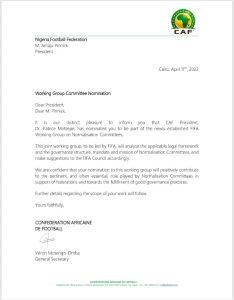 The 51-year old now has another feather, as CAF President Patrick Motsepe nominated him to be part of the newly established FIFA Working group on Normalisation Committees.

The committee will analyze the applicable legal framework and the governance structure, mandate, and mission of Normalisation Committees and make suggestions to the FIFA Council.